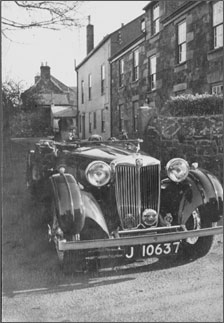 This is a parish road which took its name from the private driveway to the house, through a field on the other side of the present road and named after an early owner, a Mr Brunet (or Brunette). The driveway, or chasse, was extinguished and its name transferred to the public road, when it was driven through from St Saviour’s Road to Patier Road (possibly to give access from the fief de Grainville and Grands Vaux to St Saviour’s School).

A good example of a rural Jersey house, with late 18th century origins and alterations in early-mid 19th century and early 1900s, retaining fine stonework and good quality features from the various phases of development. The house appears to be shown on the 1795 Richmond map and its staircase newel and handrail, and the six-panel fielded doors are of 18th century design. It is not likely to be earlier as rural houses with double-pile plan forms were not seen in Jersey until that period.

The house was upgraded in the early-mid 19th century (perhaps at the time of the 1825 datestone on the façade), as is typical, concentrating on those areas most seen by visitors - the entrance hall and stairs. The hall arch with imposts is typical of this period, and the turned stair balusters possibly replaced the original stick pattern usual in late 18th century.

Another significant phase of alteration is likely to date to the Edwardian period, including the current window pattern to the front façade, the coffered ceilings to ground floor, the internal room panelling and much else of the ground floor joinery

Not included in either volume 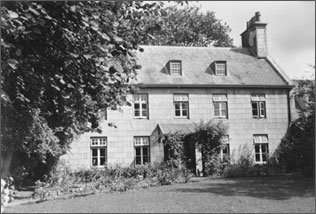 The house passed to his son, Arthur Charles Saunders, who sold it in 1901 to Hermann Becker FRHS, who changed the name to Alphington Court.

He sold it in 1908 to Francis John Bois, who changed the name back to Alphington House, and left it on his death in 1924 to his son Francis de Lisle Bois.

Surgeon Frederick William Higginson lived in the house from 1898-1900, although apparently as tenant rather than owner.

Among other tenants were; W Thackthwaite, an auction of his effects is headed “Alphington House, Saunder’s Nursery” (he left the island in 1859) [1], Bernard Hastings [2] and Yorick Jones Murrow, whose wife gave birth to a son there in 1879 and was still in residence, aged 64, in 1884 [3]. On 28 April 1908, The Jersey Times reported the sale by Hermann Becker of Caesarean Nurseries for £3,600 and of Alphington Court for £800 (Solicitors: Bois and Bois, 16 Royal Square. 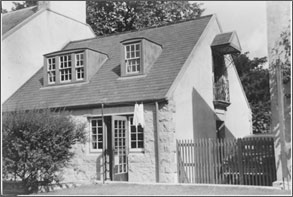 This history was prepared for Jerripedia by Giles Bois, whose family owned the property

There have been two houses of this name in St Saviour This was the original house to bear this name. The second is in Grands Vaux. Both houses were in the ownership of the Bois family and the name was transferred to the property in Grands Vaux when the family moved to an earlier residence called Vale Farm, after an absence of a generation, taking the house name with them, in 1958.

They sold this property in that year and it was renamed The Priors by the new owner.

Francis John Bois bought the house in 1908 from Hermann Becker, who had bought it not long before from the Saunders, moving his family into the house circa 1913.

His son, Francis de Lisle Bois, was born at Waverly Terrace in the same year (1908), and inherited both properties from his father in 1924. The contracts for the house at Chasse Brunet are of particular interest for the mention of Swiss Cottage and Caesarean Nurseries, also owned by the Saunders and later by Hermann Becker.

The Jerripedia page on the nurseries, features a drawing in which Alphington House appears, apparently undivided by any party wall from the nursery at that time, and featuring an outbuilding still standing in 1958, of unknown age.

Within the family the two houses are distinguished by being referred to as 'Old' and 'New' Alphington.

The house originally had a 19th century wing, poorly constructed in brick and larger than the main 18th century granite house. This contained a ballroom, billiard room and bedrooms above. Due to movements in the walls and a reputed ghost walking across the upstairs floorboards (most likely shifting in the adjoining gable) this was demolished in 1947 and replaced with a single story wing with dormer bedrooms above

When the former wing had been cleared and foundations for the new wing were being dug, a large smooth stone was found, flat and tapered at each end, clearly worked by human hands, 8 to 10 feet long by 18 to 20 inches wide and about 14 inches thick.

The purpose of this stone is unknown (perhaps a bed for machinery of a pre-industrial cottage industry) and was uncharacteristic of any Neolithic structures, being in a flecked black stone. An attempt was made to remove this stone whole, but it broke up. The aforementioned ‘ghost’ was presumed to have been assuaged and banished, when this stone was removed, as she was never heard from or seen since.

Around 1828, flagstones were salvaged from a cellar under the 18th century house, prior to it being filled in, due to concerns about the foundations, one of the floor-slabs was discovered to be a Classical low relief from Ancient Greece, presumably acquired on a ‘grand tour’ from the 18th century, but possibly imported as ballast, in the hold of a Jersey ship, trading in the Mediterranean.

After being taken to Inverness by a member of the Saunders family, this plaque was acquired by the British Museum in 1894.