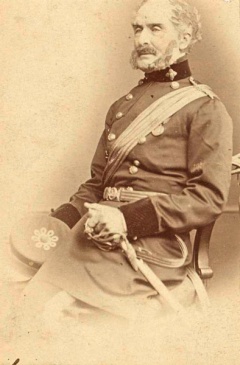 Photograph by Henry Mullins from the Amsterdam Rijksmuseum collection

He was commissioned into the Royal Artillery in 1812. He fought in the Peninsular War and at the Battle of Waterloo under the Duke of Wellington. He was appointed Lieut-Governor of Jersey in 1863 and laid the foundation stone for a new public asylum two years later.

In 1828 he married Emily Anne Fouril; they had a son and two daughters.

This article is taken from the Wikipedia biography of Burke Douglas Cuppage.