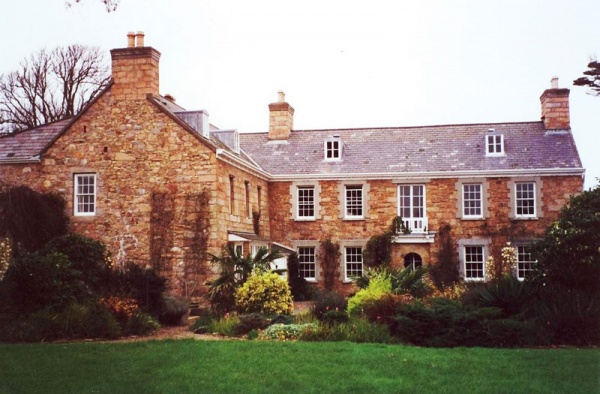 Maison du Coin is an L-shaped house with an older east-facing wing. The main features of the south-facing wing are dated by Joan Stevens in the first volume of Old Jersey Houses to the 18th century, but parts of the property are undoubtedly older because it is known to have been occupied by the Seale (Scelle) family in the previous century. There is a stone, moved from one part of the property to another, dated 1606. Jurat Thomas Seale died in the house in October 1646. In 1635 he had married Anne de Carteret, sister of Bailiff Sir George Carteret.

The house was later owned by Pierre Jean de Villeneuve, whose daughter Elizabeth married John Low (or Lowe), of Scotland, father of Alexander, the first States Deputy for St Brelade. Alexander married Henrietta Alexandre, and their daughter married the Rev G J Le Maistre, in whose family the house remained until the second half of the 20th century.

None found, despite the age of the property

A substantial rural house, of likely 17th century origins and potentially medieval history, which was redeveloped in the 19th century and retains interesting architectural features from the various periods of development. Shown on the Richmond Map of 1795.

John McCormack, in a building assessment in 1997, proposes that the L-plan arrangement reflects an early house and chamber-block footprint, which may once have been linked by a tourelle staircase. Much of the earlier building now seen as of 1606, but with the plan form in particular suggesting much earlier origins, circa 1400.

In his 2015 publication Channel Island Houses McCormack also concludes that the main build phases are 15th century, circa 1610 and 19th century - the five-bay house refronted in the early 17th century and the chamber block footprint projecting on the west. The property was certainly significantly altered and enlarged in the 19th century.

The house was used by the Germans during the Occupation, who painted frescoes on the drawing room wall, since removed.

It must always have been a house of some consequence, and has a large and imposing entrance hall and staircase, with a spacious upper landing, very like that at La Haule Manor nearby. This probably represents an interior reconstruction somewhere about 1800-1820.

The south-facing wing has a date of 1789 in one of the rooms in a northern addition, and there is said to have been a tower in the north angle where the two wings join. There could easily have been a tourelle staircase, removed at some period of alteration.

The present owner thinks there used to be a large double entrance arch on to the road, and that its stones were used in making some of the outbuildings, as the arch was too low for carriages to pass easily under it,