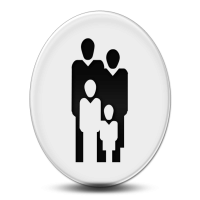 Walter Le Quesne in 1917 in the Royal Flying Corps

Direct links to lists of baptisms, marriages and burials for the Le Quesne family can be found under Family Records opposite. If you want to search for records for a spelling variant of Le Quesne, or for any other family name, just click below on the first letter of the family name you are interested in. This will open a new tab in your browser giving you a list of family names beginning with that letter, for which there are baptism records in our database of half a million church and public registry records.

If you can help with information about the Le Quesne family, please contact editcontact@theislandwiki.org, using Jerripedia as the subject of your email. We are particularly interested in information which will help create further family trees, family histories and photographs 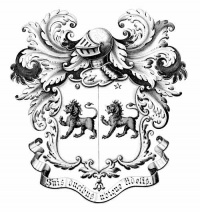 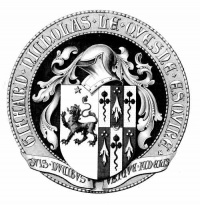 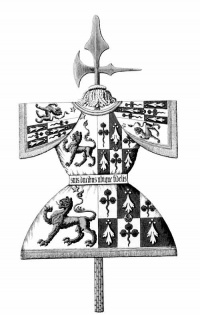 From the old French for 'oak', the original Le Quesne probably lived by an oak tree.

The surname Quesnel is found in the Extente of 1331 and Le Quesne in that of 1528. Two Le Quesnes, Jean and Thomasse, are found in the Jersey Chantry Certificate of 1550.

Walter Le Quesne's history of The Le Quesnes of Jersey shows Clement Le Quesne (1440- ) as the earliest ancestor. Gautier Le Quen is shown as a Jurat of the Royal Court in 1318.

The old Norman family, or rather families, of Caineto, Kaiueto, or Quesneto, have existed from a very early period both in England and Jersey. Raoul de Kaineto was at Hastings with the Conqueror, and his grandson, William, is said to have made prisoner King Stephen, at Lincoln. From this source spring the various English houses of Chesney, Kaines, and others of less note.

A fief, named after this family, existed in Normandy in the time of Philip-Augustus, for in the roll of his fiefs it appears that "Domina de Quesneto tenet Quesnetum per servicium unius militis."

Sir Edmund de Chesney was Governor of the Channel Islands in 1366, where his family flourished for some generations.

The Jersey house of Le Quesne had settled in the island, and had attained social importance there, long prior to this date, for, in 1318, at the Pleas held at St Helier on the Tuesday after the feast of St Denis, Gautier Le Quen appears as one of the Jurats of the Royal Court, and in the Extente of 1331, Colin Le Quesne is recorded as one of the Surveyors of the King's Dues in the parish of St John, at that time styled St John de Caisnibus.

At the period of the Rebellion, John Le Quesne, of the parish of St John, suffered for his loyalty by paying the impost levied on the Royalists by the Republicans, as appears by an instrument dated 26 November 1655, and signed by Colonel Robert Gibbon, Governor, and Michael Lemprière, Bailly, of Jersey, under the Protector.

Several members of the family settled in London during the last century. The burial of Mrs Elizabeth Le Quesne occurs in the Registers of the parish of St Benet Fink. In 1739 Sir John Le Quesne, was an Alderman of London, and in the Registers of St Peter le Poor, is noted his marriage, by the Bishop of Norwich, with Miss Mary Knight, of Hampshire, a lady with a dowry of twenty thousand pounds. He died in 1741.

As borne by Nicholas Le Quesne: Argent, a lion, passant, gules, a crescent for difference

Impaling : Argent, a lion, passant, gules, a mullet for difference, for Le Quesne.

As borne by Giffard-Nicholas Le Quesne: Argent, a lion, passant, gules, a mullet for difference.

Impaling : Per fesse, or and sable, a pale counterchanged; in chief an ermine-spot of the first, between two trefoils, slipped, of the second ; in base a like trefoil between two like ermine-spots, a crescent for difference, for Simeon.

Le Quesne and Co wine merchants, next to the Mechanics Institute in Halkett Place 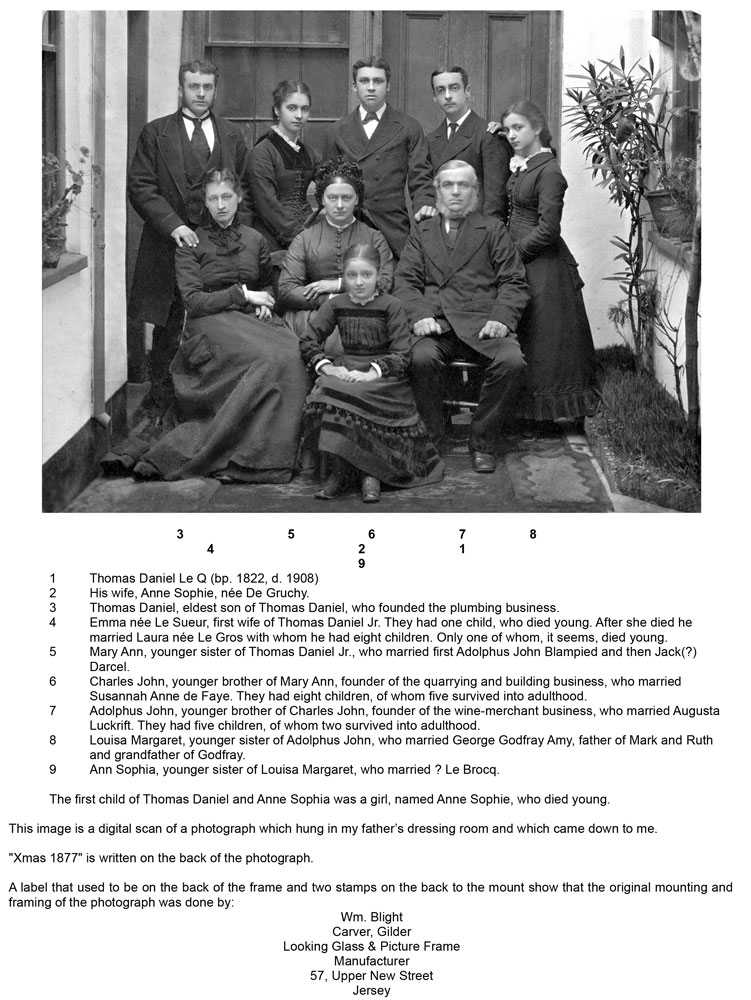 This superb family photograph, complete with comprehensive details of the family members, was sent to us by descendant Richard Le Quesne in June 2019 in response to our request on our Facebook page for people to send us digital copies of family photographs and documents so that they can be put on the site, saved for posterity and accessible to all. This family is part of the existing Jerripedia tree Descendants of Jean Le Quesne and Jeanne_Barette. We have checked our database and can add that Anna Sophia married John Le Brocq, 20 years her senior, in St Helier in 1907. We welcome any further submissions, with or without such details. Please get in touch with editcontact@theislandwiki.org if you have family treasures to share with Jerripedia users 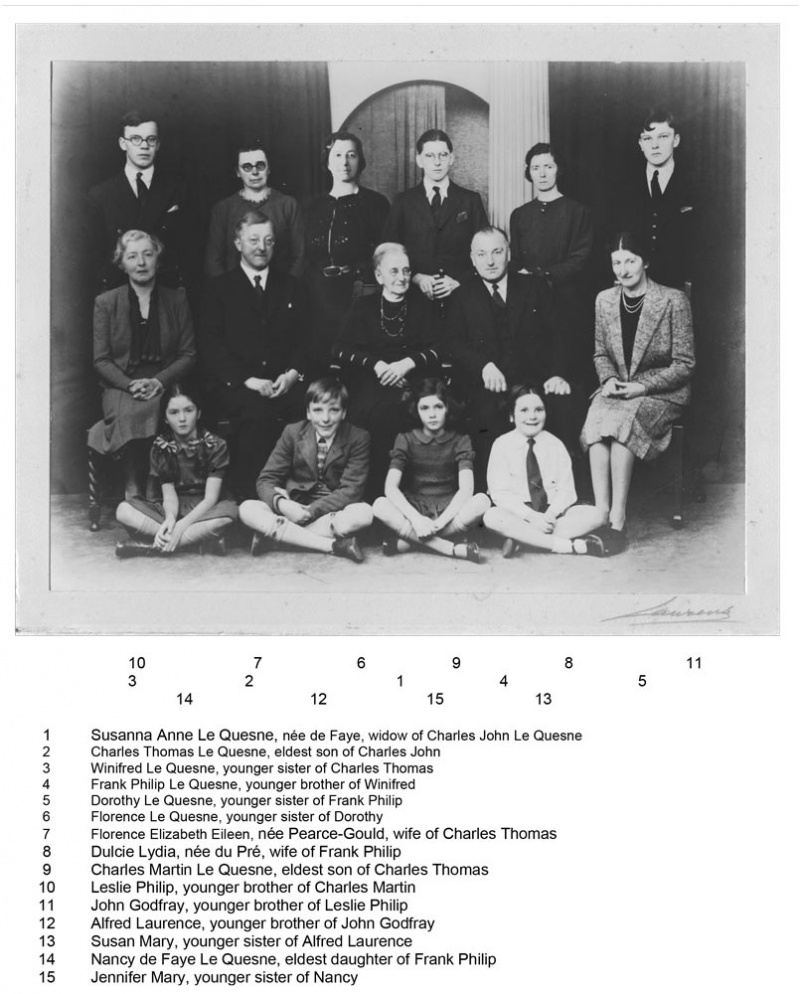 And here is another one of the same Le Quesne family in 1939. Fascinatingly it is said that Florence, in the back row, was not present for the family photograph because she was away in England. A gap was left and her image was added to the picture. A fine example of Photoshopping long before the practice became much simpler with digital technology