Noirmont is a headland in Saint Brelade enclosing St Aubin's Bay on the western side.

Noirmont Point and a substantial part of the headland behind it was acquired by the States in 1950 as the Island's war memorial, but sadly very few Jersey residents today are aware of this.

And it is a strange irony given its status as a memorial of a war in which Jersey was occupied by the Germans for five years, that probably the main reason for visiting the headland is to view the restored bunkers and gun emplacements of Batterie Lothringen, the only naval coastal artillery battery in the island and part of Hitler's infamous Atlantic Wall.

An early painting of the 1910 coastal tower

If nothing else, however, the purchase has ensured that this headland, which forms the western end of St Aubin's Bay, remains one of the few relatively unspoilt areas of the south coast of the island, with the exception of the concrete structures, which for many years were left undisturbed as a lasting memory of the dark days of the German Occupation.

More recently they have been restored by members of the Channel Islands Occupation Society with interior displays which show what they would have been like when they were built to defend the island against any attempt by the British to recapture it.

In Jèrriais the name is Nièrmont. The French form of the name follows the Jèrriais rule of the colour adjective preceding the noun: Noirmont. Both forms translate into English as the 'Black Mount'. It has long been mispronounced by generations of English-speaking islanders, who have dubbed it 'naw-maw' rather than the correct 'nwar-mo(n)'. The name originates in the dark, heather-covered skyline of the promontory, sometimes made even darker as storm clouds roll in from the Atlantic. This gave rise to the old weather lore which ran Quand Nièrmont met san bonnet, ch'est sîngne dé plyie (When Noirmont puts on its bonnet, it's a sign of rain). How reliably this should be taken is open to question, given that other Jersey weather lore suggests that "when Alderney and Guernsey can be seen from Jersey's north coast it is going to rain; and when they can't be seen it is already raining!".

Noirmont has given its name to an ancient fief (Seigneur's private land holding) and a vingtaine (administrative division of a parish) and this is the only case in Jersey of the two coinciding. 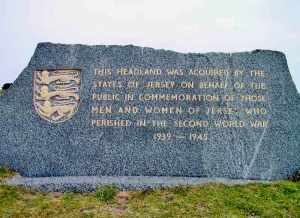 The Commemorative Stone at Noirmont, which is on a site facing out to sea, was installed by the Public Works Committee on 9 May 1970 to mark the 25th Anniversary of the Liberation of the Island. Public Works obtained a rough hewn piece of granite. In February 1970 the President of the committee and the Chief Architect viewed several large pieces of granite, with the selected stone costing £25. The stone is inscribed with the States Crest and the following inscription: "This headland was acquired by the States of Jersey on behalf of the Public in commemoration of those men and women of Jersey who perished in the Second World War 1939-1945"

For a long time the Fief du Noirmont was Crown property, having been seized by the Duke of Normandy when the island was taken from Brittany and kept in the King's ownership after the Conquest. However, before the Channel Islands split from Normandy in 1204 it had been transferred to the monks of Mont St Michel, in exchange for a Fief in Alderney, probably by Henry II.

The presence of a chapel on the Fief is recorded in the Assize Roll of 1309, but it is not known where it was situated. It does not appear to have been used frequently because the Abbot of Mont St Michel was bound to provide a service once a year, as was the Rector of the Parish. Noirmont reverted to the Crown in 1413 and was granted by Charles I to Sir George Carteret in 1643 as a reward for freeing 400 Christian slaves, including Jersey sailors and a Noirmont tenant, from the Moors.

It was sold by his great-grandson Lord Carteret to Elie Pipon, whose family held the fief for nearly 200 years. Philippe built a manor house in 1695, which was demolished and replaced by the present house in 1910. The Manor was the scene of a big celebration for the opening of the St Helier to St Aubin railway in 1870. James Pipon sold the house and fief to Girard de Quetteville in 1880, and he in turn sold it to Guy de Gruchy in 1909.

The States agreed to buy the Noirmont headland, as a memorial to islanders who lost their lives during World War 2, on 26 September 1946. A committee had been set up to consider the approval. The site was to cost £8,800 but with a proviso that if funds were not forthcoming from Islanders, the States would make up the shortfall.

By January 1947 only £2,000 had been raised by public subscription and the States paid the balance.

On 30 September 1950 the Public of the Island acquired 238 vergées, or thereabouts, of land at Warren Farm and Noirmont Headland, St Brelade, from Mrs Hope May Dixon (née de Gruchy), widow of William George Moore Dixon (Dame du Fief et Seigneurie de Noirmont). Mrs Dixon, as the reversionary owner of the Fief, Manor and Seigneury, sold the whole 238 vergées for £8,800 on condition that "it shall be preserved in perpetuity as a memorial to the men and women of Jersey who perished in the Second World War". The public also paid the costs of extinguishing the Seigneurial rights to which the land was subject. The purchase included Warren Farm, which is still in public ownership today.

The area is sometimes called Noirmont Common, which does not technically exist. This area is really La Garenne de Noirmont (Noirmont Warren), the farmland belonging to Warren Farm, the seigneurial vivier (pond) and the headland called Noirmont Point. The Commune du Fief de Noirmont is in two parts. One part is on the high ground overlooking Ouaisné, now generally called incorrectly Portelet Common. The other part is situated below it at Ouaisné and is now usually, but not legally, called Ouaisné Common. The correct names of these two areas are, respectively, Commune de Haut and Commune de Bas. Warren Farm was formerly known as La Bergerie.

A covenant on the land stipulated that there should be a single monument or memorial and that nothing else should be built. Eventually a second memorial to US sailors killed in action nearby was allowed, but an attempt by the St Brelade Social Club to have a football pitch built in 1965 was strongly resisted and rejected. 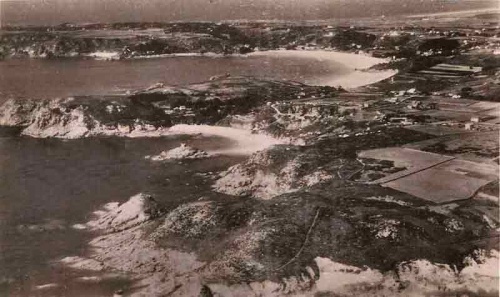 The Noirmont peninsula might have developed into Jersey's main town had a proposal to construct a harbour there been approved by the States in 1865. When the island's maritime trade was at its peak, with 421 vessels totalling nearly 50,000 tons registered in the island, and Jersey's shipyards were building vessels of 500 tons and more, there were calls to abandon St Helier Harbour in favour of a deep-water port at the other end of St Aubin's Bay, connected to St Helier by railway.

The plan was rejected after a States debate, probably fortuitously given that other factors beyond the island's control meant that the shipping industry went into sharp decline from that point onwards. Had the proposal been approved, however, the whole future development of Jersey would undoubtedly have taken an entirely different direction, probably with a commercial town at St Aubin and Noirmont and a largely residential area in St Helier.

The coastal tower at the foot of Noirmont Point is called Tour de Vinde. It was built between 1810 and 1814 when fears of a French invasion were at a new peak

The Germans began to build defense installations at Noirmont Point as early as 1941, but it was Hitler's fear of an Allied invasion on the French Atlantic coast which led to the construction of a naval artillery battery, armed with four 15cm SK L/45 naval guns, in 1944, together with a large command bunker, which has been restored and is open to the public a number of times each year.

This impressive bunker contains numerous displays and exhibits. Extending to a depth of 40 feet on two floors, this bunker was the Command Post (Leitstand) for the naval coastal artillery battery Lothringen located here. Much of the adjacent artillery battery has also been restored, including various gun emplacements and an observation tower.

One of four built to a similar design in the Channel Islands, the bunker was surmounted by a range-finder and two periscopes to determine the direction and speed of sea targets. Sealed up for safety reasons shortly after the war, the bunker escaped the scrap-drive of the early 1950s, with the result that it is the only example of its type in the Islands to retain the impressive 7 inch-thick armoured cupolas. The bunker has been restored to a very high standard and provides a unique insight into the sheer scale and thoroughness of German military engineering.

Batterie Lothringen was only German naval coastal artillery battery to be established in Jersey during the Occupation.

An aerial view of Batterie Lothringen

Sorry, we have had to remove a number of links to online information about Noirmont because the pages are no longer accessible.