Intra Airways initially operated passenger and cargo charters from the Channel Islands to the UK and the Continent with a single Douglas DC-3. At the time of its inception, Intra Airways also applied to the Air Transport Licensing Board for a licence to commence scheduled services between Jersey and Guernsey. Intra Holdings Ltd of Jersey was the newly formed airline's majority shareholder. It held 90% of Intra Airways's stock.

To support its fledgling operation, Intra Airways set up an associated engineering company based at Exeter Airport.

The ATLB granted Intra Airways its first licence to operate scheduled services at the beginning of 1971. That licence was for the Jersey—Staverton route. It resulted in the acquisition of a second DC-3. In 1974, the Civil Aviation Authority, the ATLB's successor, approved Intra Airways's application for a scheduled service licence to operate 30 weekly flights between Shoreham Airport and Jersey and/or Guernsey, with an extension to Gatwick. Intra Airways planned to serve these routes with Islanders. The new services were intended to replace the Shoreham — Channel Islands services previously operated by JF Airlines, while the extension to Gatwick was meant to connect with Intra Airways's Gatwick—Deauville service.

By 1978, Intra Airways operated scheduled passenger services linking Jersey with Cambridge and Gloucester/Cheltenham (Staverton) in the UK as well as Caen, Deauville, Dinard, St Brieuc and Nantes in France, Ostend and Brussels in Belgium, and Düsseldorf in West Germany. In addition, it operated scheduled all-cargo services between Jersey and Guernsey as well as between the Channel Islands and Bournemouth (Hurn).

In January 1979 Intra Holdings Ltd sold its holding in Intra Airways. This resulted in the airline's merger with Bournemouth-based Express Air Freight (CI) Ltd. The new entity resulting from this merger was named Jersey European Airways (JEA). It was absorbed into East Midlands-based ABC, an all-cargo airline that was part of the Field Aviation/Hunting group of companies. 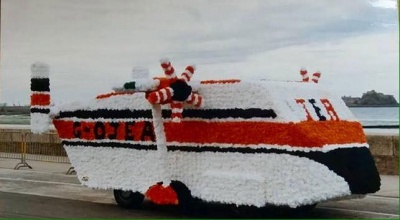 Walker Aviation Group of Lancashire then acquired JEA in 1983. Walker also owned a small airline, Spacegrand, which flew routes from Blackpool to Ireland and the Isle of Man. Jack Walker, founder of Walkersteel, had established a base in Jersey for tax reasons. He had originally founded Spacegrand in 1980 as an air taxi for Walkersteel executives; in 1982 it had contracted with JEA's sister maintenance unit.

Exeter became the hub linking the two route networks and became the company's headquarters when JEA and Spacegrand were amalgamated in 1985. The next year, JEA expanded its capacity with three Shorts SD360 aircraft. JEA carried 160,000 passengers in 1985; its annual revenues were less than £9 million.

In 1989, the ten-year-old maintenance operation, JEA (Engineering) Ltd, was moved to Exeter, where it acquired Westcountry Aviation Services. The unit, JEA's sister company under Walker Aviation ownership, was then renamed Jersey European Technical Services. It had 180 workers in 1991 and grew to employ 450 people by 2001.

In 1993, JEA added three BAe 146 "Whisper Jets" to its fleet, which then consisted primarily of Fokker F-27 turboprops.

JEA posted pretax profits of £1.8 million on turnover of £51.7 million in 1995. This was a welcome recovery from the previous year's loss of £3.7 million, but it did not come without cost; it had returned one of its leased BAe 146s and cut 40 employees from its workforce. 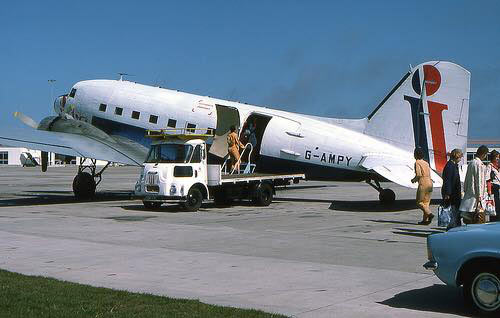 An Intra Dakota at Jersey Airport in 1978

In June 2000, a change of name to British European was effected to reflect the carrier's international work with Air France and the extension of the network into Scotland.

By 2001 BE was flying to several major cities in the British Isles and France, had 1,200 employees, operated 1,100 flights per week, including some charters. Revenues were £184 million for the airline, maintenance and leasing group.

Barry Perrott, British European's chief executive for the previous nine years, resigned in June 2001 to be replaced by Jim French. French had begun working for Jersey European in 1989 following positions with Air UK and others.

BEA was relaunched on July 18, 2002, as a budget, Internet-based, consumer-oriented airline under the brand name FlyBe. Within a year the carrier would be able to announce that 80 percent of its bookings were being made online. FlyBe celebrated this achievement by offering special fares, as low as £12 between Belfast and Birmingham.

Turnover reached £213 million in 2003, though the company struggled to regain profitability.

A significant route expansion was announced in 2003, including the addition of hubs at Bristol and Southampton. One testament to FlyBe's influence was British Airways' abandonment of the Southampton-Jersey and Southampton-Belfast markets in the summer of 2003.