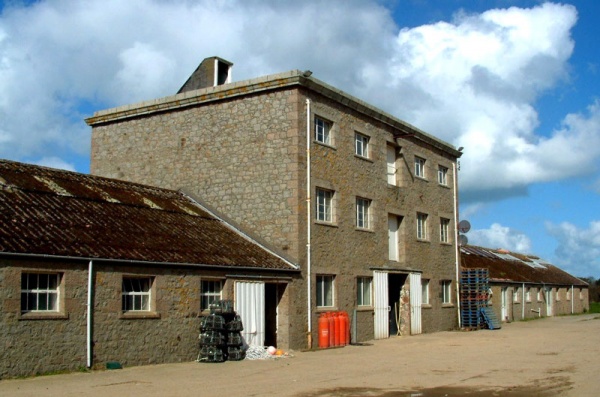 1920s farm, now converted to residential use and divided into apartments

Several families and individuals were registered as living here in 1941, including:

Vinchelez Farm was purpose-built as a dairy farm for Vinchelez de Haut Manor circa 1927, and is the only example in Jersey of a planned single phase or model farm (rather than a farmstead that has evolved over a number of years).

Constructed by Mr J H N Roberts, the farm makes a bold architectural statement in the countryside and reflects the economic strength of dairying during the inter-war period.

The farm comprised an imposing central building with a pediment and large clock surmounted by a weather vane depicting the Vinchelez herd's famous stud bull Vinchelez Golden. The central block was used for the processing and storage of animal feeding stuffs.

The central building is flanked by long single-storey ranges - those to the right housed the cows, and the left was for heifers, bulls and calving pens. The manure was conveyed from the stables to the pit by means of metal containers travelling on overhead rails.

In front, to the left, was the farm manager's two-storey house. To the right was the modern dairy for the processing of milk into butter, cream and various cheeses. These products were retailed at Mr Roberts' town shop in Halkett Place, known as Jersey Agricultural Products.

All of the buildings are of high quality masonry work, constructed of granite with dressed quoins and openings.