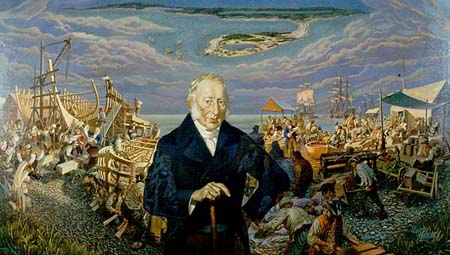 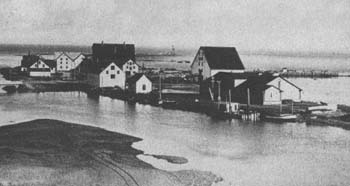 The Robin establishment at Paspebiac

Jerseymen have found fame and fortune and brought honour and credit to the island throughout the world, but few have been more successful nor had a greater influence in their new communities than Charles Robin, who founded an undertaking which would dominate the lucrative cod trade on the Canadian Gaspé peninsular and lead many fellow islanders to work there, some remaining to raise their families across the Atlantic.

During the 16th century the Basques of the Bay of Biscay entered the Newfoundland fisheries and developed what is known as the “dry cure” which involved a combination of salting and drying, and was adopted by several countries, including Britain. The process preserved the cod to survive longer voyages to more southerly and hotter regions, such as South America and the southern countries of Europe, with their large Roman Catholic populations which had a great demand for fish for fast days.

The youngest son of Captain Philippe Robin and Anne Dauvergne, Charles Robin was born in St Aubin in 1743 and joined in 1765 the newly-established family firm Robin, Pipon and Co, which had trading links with Cape Breton Island, Nova Scotia and the British colony of Newfoundland. In 1763 mainland Canada had passed from French to British control and three years later Charles Robin was sent in the brig Seaflowerto establish the potential for trading on the coast south of the St Lawrence River, which had been the territory of St Malo merchants.

He discovered that some of the best cod-fishing grounds in the Atlantic were on the Gaspé Coast where the banks extended from the Baie des Chaleurs into the St Lawrence River. The fishermen did not have to go more than two or three miles from shore to catch substantial quantities of cod. The many fine gravel beaches along the shore were excellent locations for the drying process.

Robin returned the following year and chose Paspébiac as one of the drying sites and established a tiny port as the headquarters for his company. There was a lagoon where the small fishing ships could beach in safety and a secure anchorage for larger ships. 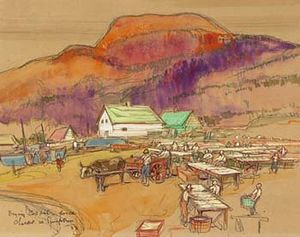 Drying cod on the seashore at Perce

Fishing for cod in offshore waters

Robin bartered with the Indian tribes, as is recorded in a 20th century book by David Lee based on his journals:

When Charles Robin finally landed at Paspebiac at 3 o’clock in the afternoon of 2 June 1767, his patience could bear no further delay. Within two hours he was afloat again in a shallop headed up the Bay to talk with Acadian fishermen at the nearby barachois of Bonaventure. Robin got there before dark and negotiated all night, arranging to trade them salt in return for dried cod. He left Bonaventure at daybreak, was back in Paspebiac by 8 o’clock in the morning, loaded his shallop with trading goods, and set sail again at 11 o’clock southward across the Bay to Caraquet, where he arrived at 5 o’clock.

He spent the next day trading hardware and salt for “thirty quintals dry codfish and sundry kinds of furs”. He left Caraquet at 3.30 the next morning and returned to Paspebiac. The following day Robin was off again in the shallop, this time to trade with the Acadian fishermen at Tracadigache and the Micmac Indians at the mouth of the Restigouche River.

Life on the Gaspé coast was very hard at this time. In addition to fluctuations in demand and availability of cod, wars broke out from time to time. Robin lost his markets in the United States during the British American War of 1812-1814 and he was forced to close down for a couple of years. He had to keep up with developments in Europe to be sure to send his ships to friendly ports.

He had ships arrested, seized by privateers, and lost valuable cargoes, but he was a resourceful man and when the British and French were at war he was known to fit out his crews with French uniforms so that if they were challenged by a French warship, they could claim to be French. All the men all spoke French fluently.

His ships avoided British ports for fear that the crew would be press ganged into Naval service. They sailed to Portugal and those wishing to return to Jersey would have to find other ships to take them. Every year Robin recruited new labour from Jersey, preferring the St Ouennais to those used to life in St Helier's town. He was known as a strict but fair employer, and nobody who wanted to remain with him was allowed to marry without his permission.

He brought in carpenters and shipwrights to build his own vessels and as business developed many ceased returning across the Atlantic in winter and made their homes on the Canadian coast. 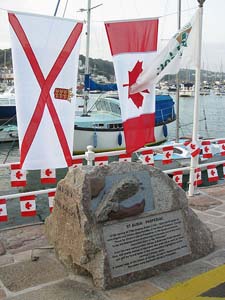 He also kept a tight control over the fishermen who sold their cod to his company. They were paid partly in cash and partly in goods which could be obtained from his stores. When times were hard they were offered credit. If they tried to trade with competing companies which gradually established in the area they were threatened with a summons for debt.

In the early days Robin had a largely free hand to develop his business as he wished but in 1787 the Legislative Council in Québec began to take an interest in regulating the fisheries of the Gaspé Coast. Charles Robin was not invited to the hearings in Québec, but if the government was going to impose regulations which affected his business, he was determined to be there.

He left Paspébiac on 8 January 1787 and walked the 300 miles to Quebec in 20 days. He spent the next three weeks meeting and dining with various government officials before walking back to Gaspé and the regulations which were enacted were largely favourable to his operation.

Robin finally left Gaspé for the last time in 1802 and the business was continued by his brother's sons, who eventually appointed managers to run the Canadian side of the business for them. As far as we have been able to ascertain, Charles never married. 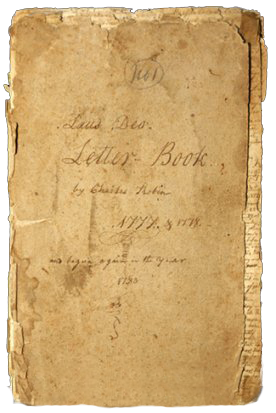 Chasing the Cod, by Doug Ford