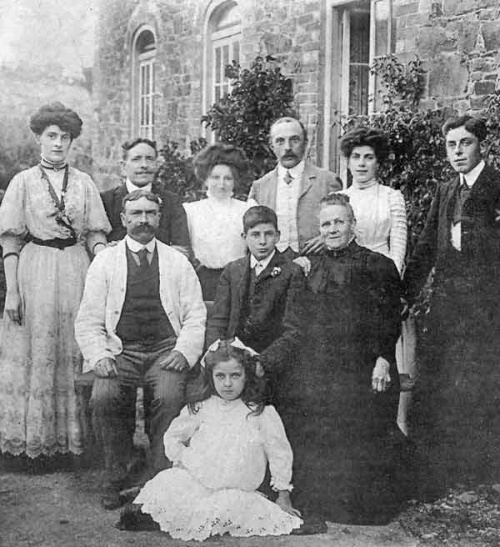 The Smith family photographed by Francis Foot around 1909

It is amazing where one can come across photographs of one's family, but to find a picture of your grandmother and grandfather in a Jersey Evening Post supplement published just months after retiring as managing director, and previously editor, of the newspaper, came as quite a surprise to Jerripedia editor Mike Bisson.

He takes up the story:

"I left the JEP in 1996 after a career of 27 years which culminated in editing the newspaper and then being appointed managing director of the company which published the newspaper and its associated activities. I then moved to France, where I am living again, and had no idea that a 20-page supplement of images by renowned Jersey photographer Francis Foot had been published less than a year later. I first discovered this supplement in 2012 while sorting through my mother-in-law's possessions after her death. Imagine my surprise when I spotted a picture captioned:'This unknown family is pictured in the garden of a very distinctive house with arches over the windows which may give a clue to their identity.'

"I did not need to take note of the distinctive window arches, because this was a picture I already knew very well - it was my maternal grandmother's family at their home around 1900-1910, Highfield, St Saviour. Among those in the photograph were Granny Constance Rimington (nee Smith), her future husband Jimmy Rimington, and various members of the Smith family."

I have other photographs taken at the same session, probably in 1909, showing the Smiths with their musical instruments, and already appearing in a gallery of photographs of my family which I added to Jerripedia some time ago."

Francis Foot was born in 1885, the son of Francois Foot (1847-1918) and Louisa Hunt (1843-1934). Francois was a china and Glass dealer in Dumaresq Street, at a time when the area was one of the more affluent in St Helier. His son started his working life as a gas fitter. However, he soon became fascinated by photography and the early phonographs and gramophone records and realised that he could earn a living from them.

So the family took on a second shop in Pitt Street, where Francis worked as a photographer, while his father and mother sold gramophones, records and other wares in Dumaresq Street. After his father's death, Francis concentrated the business in Pitt Street. 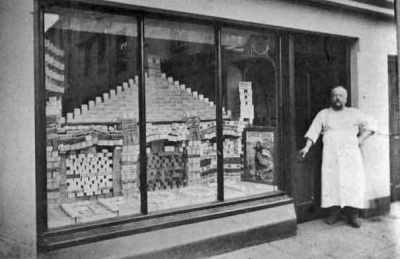 Francis Foot outside his shop

The family had prospered through holding the HMV franchise for Jersey and the famous corporate logo, based on a painting created in 1899 by Francis Barraud, of the dog Nipper listening to a cylinder phonograph, was painted on the Dumaresq Street wall, where it remains to this day, and was completely restored in 2018.

Some of Francis Foot's photographs were published as postcards, although many of his images feature portraits of his family. Eventually the gramophone and record side of his business became more important and took over the larger shop in Pitt Street, where Francis was still selling records in the 1950s and 60s when they were made from vinyl.

It was Stanley's son John who gave the collection of the glass plates and other photographic material, which had been gathering dust since his grandfather's death, to La Société Jersiaise. in 1996. Its on line photographic archive contains 322 images of subjects as diverse as Battles of Flowers, St Helier Harbour, shipwrecks, fetes and coastal and country views.

Francis Foot also took 16mm black and white cine films, some of which, from the 1930s, are now held by the Jersey Archive. These show such events as aircraft landing on the beach at West Park, a visit by HMS Sheffield, cattle shows, Battle of Flowers at Springfield and the Liberation and visit soon after of King George VI and Queen Elizabeth.