French workers and the Jersey population 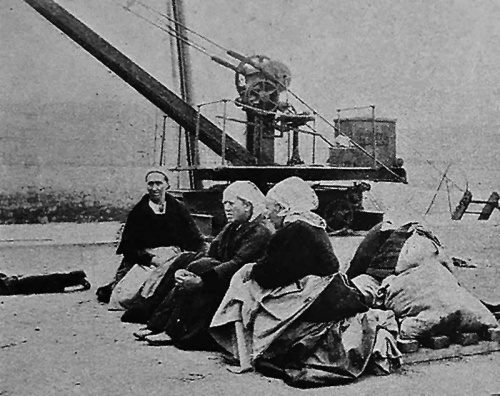 From the 16th century to the early 19th century Jersey became the home for French religious refugees. There is no way of knowing how many French refugees there were in Jersey at any one time. One estimate spoke of between 3,000 and 4,000, which would be a significant number when compared with a population of around 20,000.

From the early 19th Century to the middle of the 20th Century there was a different type of migration, agricultural workers from Brittany and Normandy. Most probably intended to be short term migrants, planning to return to France. But some decided to settle in Jersey, with many of today Jersey’s population being descended from them.

This article analyses the available information on the nature of that migration - who were the migrants, where did they come from and why did they come. In doing so the article draws heavily on a recent and important study of Jersey by a French academic Michel Monteil (‘’L'émigration française vers Jersey, 1850-1950’’, l'Université de Provence, 2005).

Between 1851 and 1921 the population of Jersey fell by nearly 13%, the decrease being particularly marked in the 1870s, and between 1911 and 1921; in this latter period largely a consequence of the Great War.

Immigration from France occurred largely during this time of falling population. Between 1851 and 1891 the population of Jersey fell by 2,500 while the number of people recorded in the Census who were born in France increased by over 3,000.

Unfortunately the 1841 Census does not give a figure for the French-born population. However, it does give a figure for total “non-British” of 3,032. In 1851 just 204 people non-British people were recorded as having a place of birth other than France, suggesting that most of 3,032 “non-British” in 1841 were French born. In turn this suggests that the French-born population may have declined between 1841 and 1851.

The earliest French economic migrants probably worked in constructing the harbour in St Helier and in the quarry at Ronez. However, they were heavily outnumbered, particularly in the construction industry, by the Scots and Irish, and most of them probably returned to France when construction work was completed in the 1840s.

The migration of agricultural workers began in the 1840s and accelerated throughout the remainder of the Century. There was a fairly steady increase in the French-born population of almost 4,000 between 1851 and 1901, a period when the total population fell by 4,500.

As a consequence the proportion of the population born in France rose from 3.5% to 11.4%. In addition, as the 1891 and 1901 Censuses show, many of the French immigrants settled in Jersey and had children who, although Jersey-born, were part of the French community. (In 1901 30% of all children born in Jersey had French-born fathers.)

The experience of the second half of the 19th Century in Jersey is that a high level of immigration to serve a sector of the economy is compatible with net emigration. In the second half of the 19th Century the number of Irish-born people recorded in the Censuses fell from a peak of 2,704 to just 623, while in the same period the number of people born in Scotland and England and Wales more than halved. There was also significant emigration of young Jersey-born people.

Monteil reviews the available evidence on the number of French workers in Jersey. Censuses are not reliable, particularly in capturing foreign workers, so the Census figures probably understate the true numbers quite considerably.

This is even more significant in respect of French agricultural workers, many of whom were seasonal and therefore would not have been recorded on Census night which generally was in April just as the potato season was beginning. Monteil quotes the French Consul in 1871 that there were 5,000 French people in Jersey. His successor in 1873 suggested the figure was 8,000. In 1882 the Consul said that there were not less than 10,000 French people in Jersey of whom 2,000 had become naturalised Jersey people.

The following year the Consul quoted a figure of 8,000 French citizens. Monteil notes that these figures are some two to three times the Census estimates. He suggests that the Consul’s estimates may well be exaggerated, perhaps to emphasis the importance of their own positions. Having said this, it is probably the case that the Census figures understand the number of French workers and certainly do not capture the full extent of short term seasonal workers. 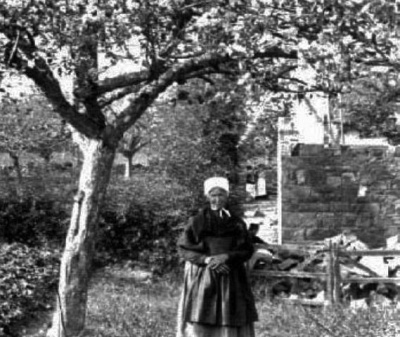 A Breton lady on a Jersey farm

Why there were French migrant workers in Jersey?

Monteil analyses both the economy of Jersey and its need for migrant labour, and the economic situation in Brittany and Normandy which led to emigration in search of work. He notes Jersey’s fiscal advantages which contributed significantly to its economic prosperity in the 19th Century, also the key decision in 1786 to ban the import of cows which proved to be the stimulus for the cattle industry. French migrant workers are closely tied the growth of the new potato industry. Jersey established a market niche through the breeding of the Jersey Royal and the favourable climate meant that Jersey new potatoes were first into the market each year, and could command a premium price. Exports increased from 1,400 tonnes in 1810 to 17,670 tonnes in 1840.

In short Jersey did not have a supply of workers able to harvest the new potato crop so French agricultural workers had to be imported.

Monteil analyses why workers were sought from France rather than England. The answer was that French workers were cheaper and also the new potato season coincided with the time of year in Brittany and Normandy of least agricultural activity. Migration depends on conditions in both the host and the home country. Monteil explains the severe economic conditions in Brittany in particular in the second half of the 19th century.

Between 1866 and 1946 more than 115,000 people left the Department of Côtes du Nord (now called the Côtes d’Armor), emigration being particularly strong in 1872 and between 1911 and 1921. Economic migrants from the Côtes du Nord went either to Jersey, the French colonies, Canada or Paris. Monteil notes that agriculture was backward in the Côtes du Nord and he mentions the famine in 1847 when 20,000 people died. Pay rates in the Côtes du Nord on average were half those in France generally. By working for just a few months in Jersey French workers could earn far more than would in a year in Brittany.

Monteil describes what happened in the 1930s when Jersey responded to a request from the British Government to employ workers from England rather than France. In short, the English workers were found to be unsatisfactory compared with the traditional workers from France.

Monteil’s important study deals in detail with how workers were recruited, their living conditions and their impact on society in Jersey.

The origin of the French agricultural workers

This section seeks to provide a more accurate analysis of the origin of the French immigrants. It is based on an analysis of alien registration cards of people born in France. Under the Alien Restrictions Act 1920 all aliens over the age of 16, no matter how old they were or how long they had been living in Jersey, were required to register with the Immigration Officer. Around 2,000 individual records of aliens born prior to 1908 are available.

The registration documents are held in the Jersey Archive and can be accessed from http://www.jerseyheritagetrust.jeron.je.

Some words of caution are necessary. Interpreting the wording of the records is not always easy. The place of birth is recorded, but this not necessarily where the migrants were when they decided to move to Jersey. There is also a risk of some double counting.

The table shows that just over half the migrants were from the Côtes du Nord, 20% from Manche and the remainder from other departments. But perhaps what is most striking about the table is the very large number of communes recorded. 169 communes in the Côtes du Nord and 94 in Manche appear just once in the records.

Most of the migrants from Brittany travelled to Jersey from the port of St Brieuc.

Table 3 shows the communes most often recorded as places of birth in the Côtes du Nord. Again, this must be qualified, as there some communes may be little more than suburbs of larger towns. This is particularly true of Langueux, which is a suburb of St Brieuc.

The approach has been to analyse the place of birth as named on the alien registration certificate and not to seek to make any corrections.

One commune stands out – Ploeuc, or more fully Ploeuc-sur-Lie. This is a commune now with a little under 3,000 inhabitants. It is about 20km south of St Brieuc. Its neighbouring communes - Plaintel, St Carreuc, Henon and Plemy - are also in the table.

Ploeuc can be easily confused with Plouec, which was renamed Plouec-de-Trieux in 1980, which is nearly 40km north west of St Brieuc, and which also features in the table.

With the exception of the large town of Lannion, all the communes listed are within 45km of St Brieuc. With a few exceptions they are also all inland. Generally, the agricultural workers did not come from the coastal towns such as St Quay Portrieux and Etables.

St Brieuc, including its suburb of Langueux, is the exception to this. However, it owes in place in the table to the fact that it was by far the largest town in the area, and much of the town is in fact inland.

The communes in Manche are, for the most part, in a 15km strip between Carteret and Lessay, Carteret probably being the port of embarkation. There are a few exceptions – Granville and Muneville-sur-Mer, 60 km to the south, and Bricquebec which is north east of Carteret, some distance away from the other communes listed. As in the Côtes du Nord most of the communes are inland. Table 4 shows the position.

Today, Jersey’s links with France are predominantly through St Malo. However, the registration cards record just 19 people born in St Malo and 17 in neighbouring St Servan. Other communes with more than a few records are Cleguerec (7), Berne, Guern and Silfiac (4 each) in Morbihan and Quimperlé (5) and Brest (4) in Finistère.

Monteil analysed passport applications by Bretons wishing to travel to Jersey in the 1920s and observed that the following communes were most frequently mentioned (in alphabetical order): Gomenech, Langeaux, Plaintel, Pledran, Plerin, Ploeuc-sur- Lie, Plouha, Quintin, Saint Brieuc, Trimerven, Vieux-Bourg and Yffiniac. There is a reasonable correspondence between this list and Table 2.

Monteil also analysed the geographical origin of French people married in the Parish Church of St Martin between 1850 and 1940. 25% were recorded as coming from Brittany, 37% from Manche, 1% from Paris and for 38% the region was not stated. The communes most frequently mentioned were St Brieuc (11 times), Portbail (9) and Saint Lo (5).

This reflects the gradual decline in the importance of the new potato industry and its replacement by tourism, and then finance, and more importantly by the growing prosperity of Brittany and Normandy, such that working for a season in Jersey became increasingly less attractive.

Jersey’s need for manual workers was gradually met by the Portuguese, mainly from Madeira, and more recently by the Poles. However, the French migrants have left their mark in the island – thousands of people who would describe themselves as being “true Jerseymen” being descended from an army of Breton and Norman agricultural labours whose wish to increase their earnings coincided with Jersey’s need for migrant labour to sustain its economy.

French nationals born in Ploeuc, registered in Jersey as aliens, under the Alien Restrictions Act 1920

Under the Alien Restrictions Act 1920, all aliens over the age of 16 had to register with the Immigration Officer no matter how long they had been living in Jersey. The largest commune recorded as a place of birth for those who registered was Ploeuc, 20km south of St Brieuc, which was the port of embarkation for Bretagne workers travelling to Jersey.

Following is a list of all those who registered together with their dates of birth. The information is taken from the Registration Records in the Jersey Archive, which only record those born prior to 1908.