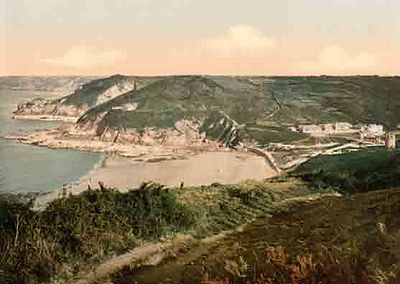 The bay with the sandy shore

Grève is French for beach. In 1215 the bay was known as La Wik, which has led to suggestions that it is derived from the Old Norse vic for a bay, making it "the bay with a sandy shore", but the name covers a much wider area, including the Chapelle de Lecq, which was a mile inland. The Paternoster rocks four miles out to sea are also known as Les Pierres de Lecq, so there are doubts that a small bay could have given its name to such an extensive area in the north of the island.

On the eastern side of the bay, which straddles the border of Saint Mary and Saint Ouen, is Castel de Lecq, a large mound with entrenchments which may date from the Late Iron Age. Nearby Câtel Fort is an 18th century guardhouse, built when a French invasion was feared at Grève de Lecq.

Down in the bay are Grève de Lecq Barracks, construction of which began in 1810 when another invasion was feared during the Napoleonic wars. They are the only surviving barracks in the island, having been in use until the 1920s, housing 250 garrison troops.

From The Bailiwick of Jersey by George Balleine

"Greve de Lecq, A small bay on the north coast partly in St Ouen's and partly in St Mary's parish, the mill stream of the Moulin de Lecq dividing the parishes. Greve is the French word for a sandy shore. In Jersey we have Greve au Lancon and Greve d'Azette, in Sark La Grande Greve and La Greve de la Ville, in Guernsey La Belle Greve. The meaning of Lecq is uncertain. In 1215 it was spelt La Wik, which makes it tempting to derive it from Old Norse Vic, a bay; but the name seems to have extended over a wider area than the bay. The district known as Lecq is some way to the west. The Chapelle de Lecq was a mile inland. The older name for the Paternoster Rocks, four miles out to sea, is Les Pierres de Lecq. It seems doubtful whether so small a bay could have spread its name so far.

"On the east of the bay is the Castel de Lecq, a mound 270 feet high, artificially contrived upon native granite, which bears obvious traces of ancient entrenchments. Until proper excavations have been made, it is impossible to date these; but they probably belong to the Late Iron Age, when many similar promontory forts were made in Cornwall and Brittany, and along our north coast.

"Some experts think this one is later, even perhaps mediaeval. They may, however, have remained in use as late as the 15th century, for Diaz da Gomez, who accompanied Pero Nino in his raid of 1406, says that there were then "five fortified castles" in the island. Three of of these would be Mont Orgueil, Grosnez, and Chastel Sedement. It is difficult to guess what the others could have been, unless they were the Castel de Lecq and the similar Castel at Rozel. 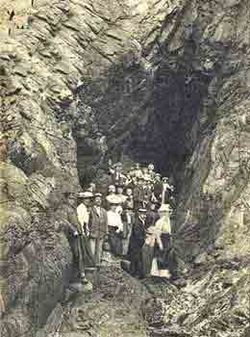 Inside the Grève de Lecq cave

"A remarkable cave runs right through the eastern headland. It is a tunnel 60 feet long, 15 feet wide, and 20 feet high, and emerges into the little creek on the other side of the hill, named Le Val Rouget.

"The Assize of 1309 mentions a shipwreck "at the Port of Laic", when a Jean Patier was accused of removing wreckage belonging to the king; but usually this was a quiet little cove, where nothing exciting happened, merely used by small boats sailing to Guernsey and Sark. When Dumouriez in 1779 drew up his detailed plans for the capture of Jersey, he arranged that half the expeditionary force should land at Greve de Lecq.

"The bay had to be defended. That year a guard-house was built. Then a martello tower in 1780. By 1783 a redoubt had been placed on the eastern hill. A report in 1804 mentioned 'two twelve-pounders on the west flank and three twelve-pounders on the east, 600 yards apart and about 100 feet above high-water mark; a battery of three-pounders, the foot of which is washed by spring tides; about 150 yards in rear of this is a Tower.'

"The barracks were a later addition, and in 1817 Plees writes, 'of late years some very neat barracks, for the accommodation of 250 men, have been erected'. The pier was not built till 1872, and thirteen years later it was partially destroyed by a storm.

"How old the water-mill may be is unknown. In a map of 1783 it is marked "Fuller's Mill", but there is no doubt that it is centuries older than that.

"Meanwhile, in the Rue de la Capelle at the top of the hill, was another building that figures often in mediaeval records. In 1168 Robert de Torigni, the most famous of the abbots of the great monastery of Mont St Michel in Normandy, visited his kinsman Philippe de Carteret at St Ouen's Manor, and Philippe presented to the abbey 'the Chapel of St Mary, beside which I have prepared a suitable house'. When 50 years later his grandson transferred '29 perches of land to the west of this house to the monks who there serve God', he described the chapel as the Chapel of St Mary de la Wik.

"It was only a small priory; towards the end of its life it seems to have had only two resident monks, who collected the dues owed to the parent abbey, but the prior was a person of some importance in the Island. The chapel had its own perquage leading down to the bay, being apparently the only chapel in the Island to enjoy this privilege, which elsewhere was reserved for the parish churches. But when Henry V in 1413 suppressed all alien priories, the prior and his monks had to depart for Normandy, and henceforth its endowments were collected for the Crown. In an Extente as late as 1749 the item appears: 'Wheats due for the Chappell de Laicq'.

"Leland's map in 1540 mentions 'Ruined Chapel of Ste Marie de Lee'; and in that year it appears for the last time in history. On Shrove Tuesday a surreptitious wedding took place among the ruins.

"Edward de Carteret, the 22-year-old Vicomte, was married by a priest to the widow of old Michel Sarre, the richest man in the Island, who had died only a fortnight before. Soon after this de Carteret was arrested for the murder of Sarre. It was alleged that he had broken into Sarre's bedroom, where he and his wife were in bed, savagely beaten him, and thrown him into an empty room and fastened the door with a cord, where he left him to die of his injuries, while he spent the rest of the night with the wife. The case dragged on from Court to Court, and eventually came before the Star Chamber; but the verdict is not recorded."

This picture of Greve de Lecq shows the end of the pier intact. Construction of the pier started in 1872 and it was in use by 1876. The pierhead was partially demolished by a storm in 1878, but although it was repaired, the whole centre section of the pier was washed away in another storm in 1884. The picture apparently predates that below, dated to 1877-79, because that shows several new buildings, so this picture must have been taken around 1875-76 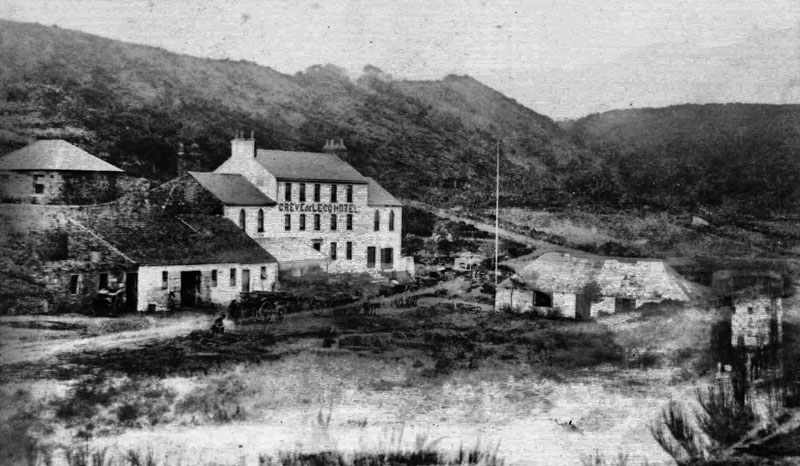 An earlier photograph of the hotel viewed from the opposite direction 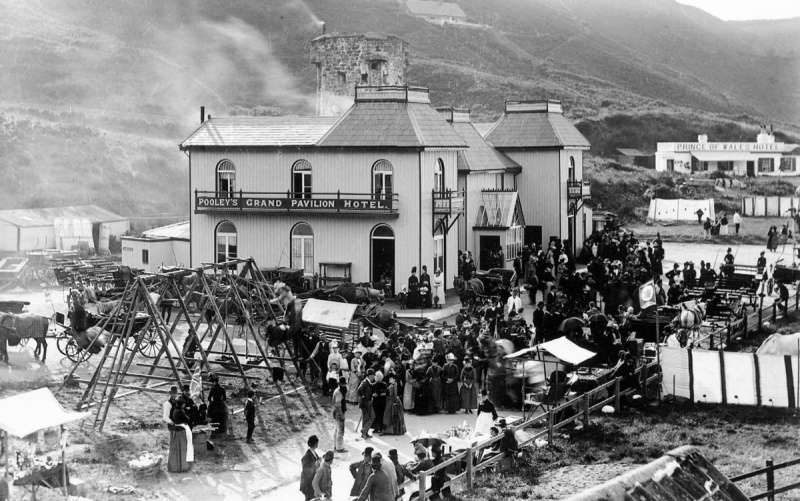 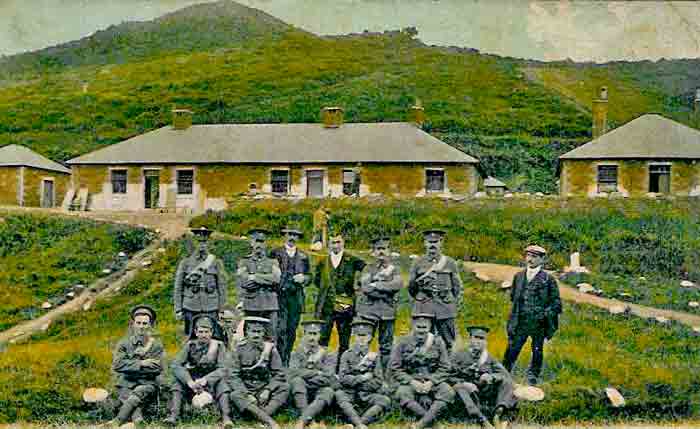 A Militia camp at the barracks 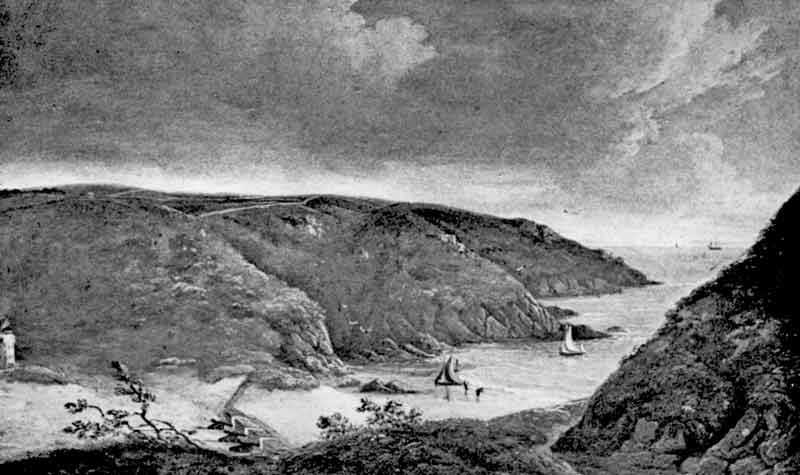 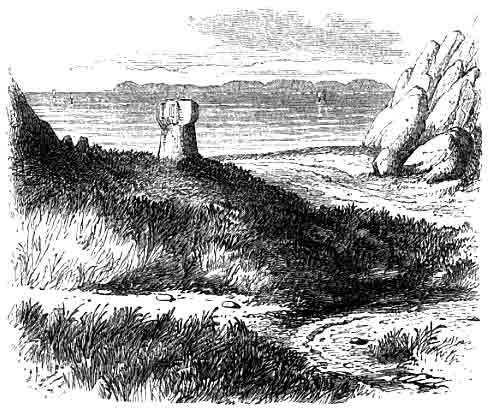 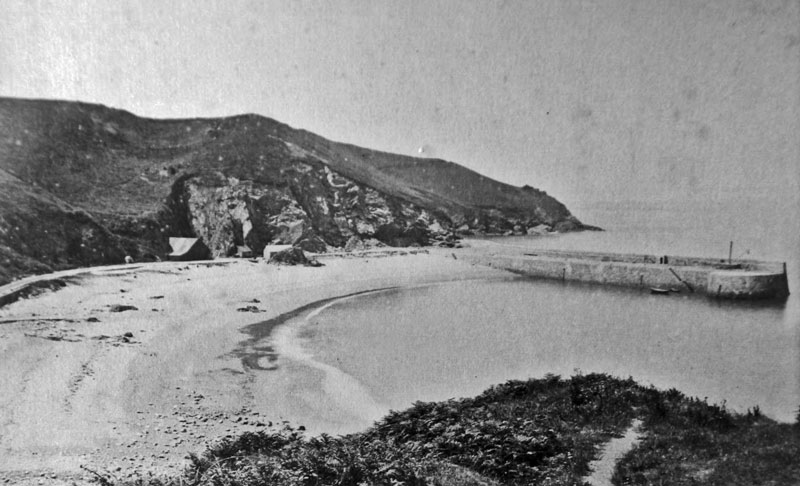 This albumen print, which we discovered in France in 2016, was the first close-up view of the pier before it was damaged which we had seen. It was dated 1891, but we know that to be incorrect because the whole centre section of the pier had been reduced to rubble by then. We think it more likely that the photograph was taken in 1881 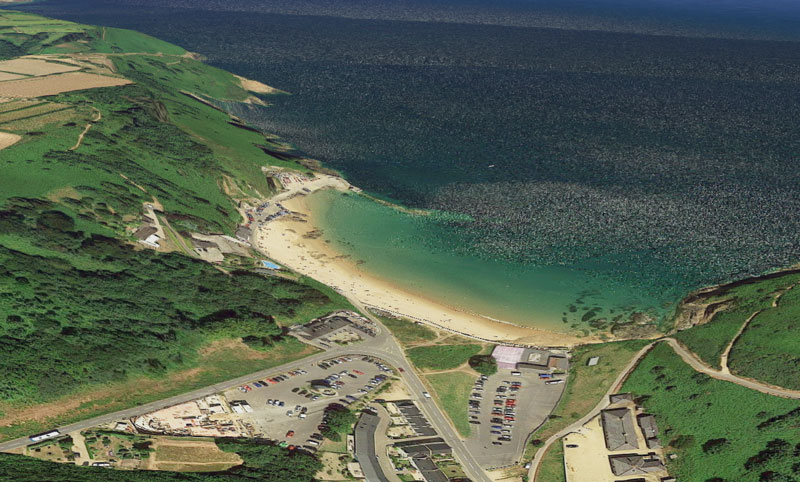 A three-dimensional satellite view, courtesy of Google Maps, shows what remains of the pier, the rubble still marking the line of the original structure, and, right of centre, the car park and Cafe Romany on land reclaimed when the access road to the pier was constructed in the 1870s, with part of Greve de Lecq Barracks showing in the bottom right of the picture

Beach tents in 1933 - probably the only north coast beach which offered them. And the picture appears to show two camera obscuras 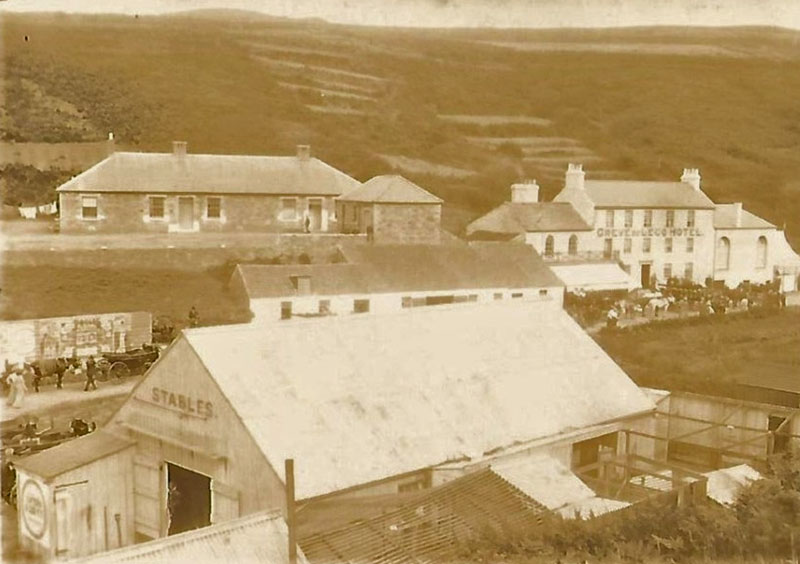 Queues of carriages behind the stables in 1900 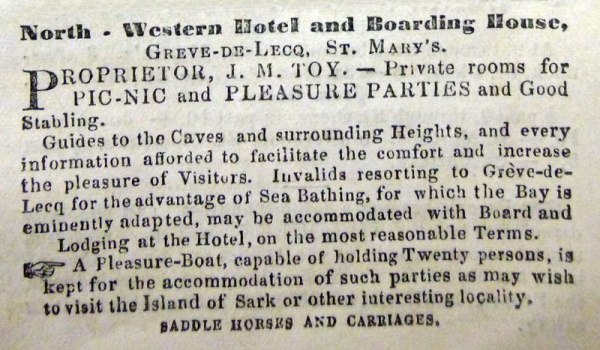 The North-Western Hotel was on the St Mary side of the bay in 1852. It only had this name for a short time. A year earlier it is listed in the census as Greve de Lecq House, and it soon became known as Greve de Lecq Hotel. In the middle of the 19th century it was run by John M Toy, who came to Jersey from Cornwall and lived at the hotel with his wife and 13 children, the last five born in Jersey.
Retrieved from "https://theislandwiki.org/index.php/Gr%C3%A8ve_de_Lecq"