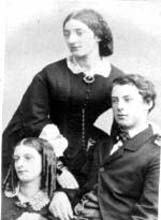 Henry Mullins started working at 230 Regent Street in London in the 1840s and moved to Jersey in July 1848, setting up a studio known as the Royal Saloon, at 7 Royal Square. Initially he was in partnership with a Mr Millward, about whom very little is known. By the following year he was working alone and he continued to work out of the same studio for another 26 years.

For a brief period in the 1860s he also worked in London, but judging by the collection of his photographs which is now held by La Société Jersiaise, he found plenty of willing sitters in the island prepared to pay half a guinea (promoted as "one half of that in London") to have their portrait taken by him.

His speciality was cartes de visite and the photographic archive of La Société contains a massive collection of these. Their on line archive contains 9600 images, but the majority of these are sets of up to 16 photographs taken at a single sitting. In those times even 10s 6d was a substantial sum to pay to have one's photograph taken, and included among his subjects are many of the island's affluent and influential people, including Dean Le Breton, the father of Lillie Langtry.

He was also popular with officers of the Royal Militia Island of Jersey, for whom it was very popular to have portraits taken, as well as of their wives and children, for the more senior and more affluent officers. The pictures of these officers show clearly the fashion for long hair, whiskers and beards in the mid-1800s. Indeed, so similar is their appearance and so stylised the portraits, it is very hard to detect much difference between a large number of officers of the same rank and social standing. 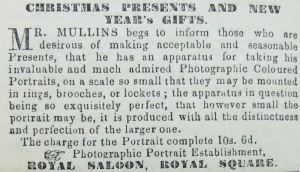 Mullins opened his Royal Square studio in 1848. This advert was from 1852

An advertisement in the Jersey Times of 5 June 1849 states that "Portraits are taken in groups of two or three, or the single figure, or bust, and of various sizes, even small enough for a ring, the charge for which is reduced to one half of that in London, viz: 10s 6d for the portrait complete. Instruction given in the Calotype, Energiatype, or photographic processes, and proficiency guaranteed for a fee of five guineas".

After his death his collection of over 20,000 negatives was acquired in 1883 by Clarence Philip Ouless and formed part of his collection which was given to La Société in 2006.

A very early and superb quality portrait. A Mr Bolton, photographed by Henry Mullins in 1849-50, about a year after he started in business
Retrieved from "https://www.theislandwiki.org/index.php/Henry_Mullins"