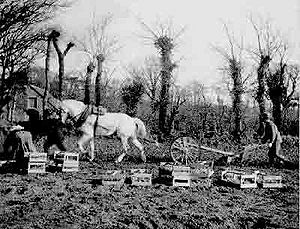 Hugh de la Haye was born in Jersey in 1835, the son of Jean de la Haye and Marie Voisin. He farmed at Bushy Farm, Mont Cochon.

The story is famously told that over dinner with neighbours in about 1880 he passed round two huge potatoes which had been given to him as curiosities by wholesaler Caudey’s Stores on the Esplanade.

One of the potatoes with 16 eyes was cut into pieces which were planted on a côtil above Bellozanne Valley. The following spring they produced an early and large crop of kidney-shaped potatoes.

De la Haye nursed this new variety until he had enough to sell commercially and they were exhibited in the window of the Nouvelle Chronique, whose owner Charles Le Feuvre named them Royal Jersey Flukes.

De la Haye did not make much money from these potatoes, but they were the foundation of the early potato industry, which brought prosperity to Jersey’s farmers and the island in general, and are still grown and much prized today.