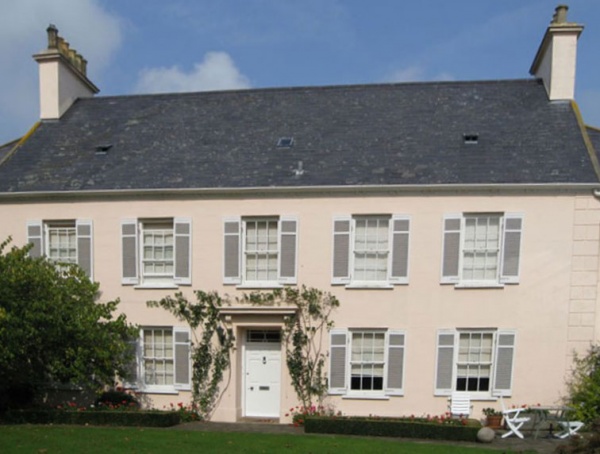 The owner, John Walsh (or Wallis), decided to build a new home as far from the sea as possible, and it is said that he bought land in the very centre of the island, at St Lawrence, as this extract from our article on Handois Manor by Joan Stevens explains.

'"St Germain, an ancient seat whose ruins yet remain... "

'And a manuscript says that the present house was built in 1694 by Philip Le Hardy. These facts support the local tradition that the original owner had decided to build his house as far away from the sea as possible, and Colonel J Bichard, who lived there until his death in 1955, used to make the proud boast to his visitors, clapping his hand over the newel post of the stairs: "This spot is the centre of the island."

'It is fairly clear that during the 16th and early 17th century the house of Les Saints Germains was in ruins and uninhabitable and Handois must have been the Seigneur's home. But Mr G de Gruchy thinks that the de Garis lived at Les Saints Germains, as in 1364 Edmond de Garis, then a child, is stated as having gardens 'at St Germain by the brook on the borders of St Lawrence and St John'.

'This description fits the house of Les Saints Germains perfectly, but we have already seen that it was the Walshes who built it, probably before 1364 (if we are right in dating the inundation of La Brequette to about 1350) and the Walshes only obtained possession of the fiefs by marriage with the de Garis widow, Eleonore, mother of this Edmond.

'Her first husband, Jean de Garis, died probably in 1361, so that 1362 is the earliest date when the Walshes could have claimed the fief. It seems quite possible that the de Garis lived at Handois, possibly renting a garden on the Walsh property. It seems clear that the Walshes built their house at Sts Germains before they acquired the fief through the marriage of Geoffrey Walsh to Eleonore de Garis, nee de Chesney.'

A good example of 19th century farm group with earlier remains and history dating back to 14th century. Historically of manorial status. The plural use of Saints' names may refer to the two manor houses, the subject manor and Handois, which have at various times been associated with the Fief. The Fief has been recorded from the 13th century and titled Handois, St Germain, Les Quartiers ou Garis. The origins of the present Les Saints Germains manor is linked to a legend of the Manor of La Brecquette, which is said to have been engulfed by the sea during a hurricane in 1356. By mid-14th century the seigneurs of Handois were living at Les Saints Germains with the old manor house at Handois sold away from the Fief circa 1485, briefly reunited in the 20th century and separated again in 1978.

Records show that the present house at Saints Germains was built 1694 by Philippe Le Hardy, following the progressive demolition of the old manor, which was built with a flat-topped square tower, between 1636 and 1638 under the direction of Sir Philippe de Carteret, Bailiff and Lieut-Governor of the Island. The stone was carted off to the islet of St Helier for the fortifications at Elizabeth Castle. Not the entire old house was demolished, indicated by walls approximately 1 metre thick. One massive gable wall of the 14th century manor survives to its full height in the west end of the house, with the relieving arch of its former chimney visible in the roof-space.

In the 19th century the house was modernised and extended.

The farm buildings date from 1830-50. The double round arch at the west entrance was moved from a farm at St John and erected c1890. The two-storey, five-bay house is 19th century with late 17th century origins.

Mrs Stevens writes that St Germain's Manor was demolished in 1636-38 and the stone was carted away for the construction of Elizabeth Castle.