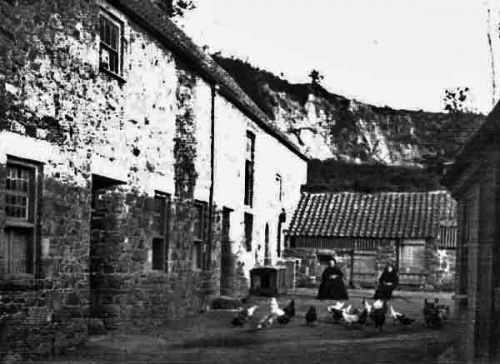 Longueville, or Longueville Farm, in Rue St Thomas, St Saviour, was popularly known as Anthoine's Farm, having been in the Anthoine family from the 1600s until the late 19th century.

When the photograph on the right was taken in 1881 the Anthoines were no longer living in the farm, but it had either been rented or sold to the Gautier family and the Anthoines, Thomas and his wife Mary Anne, and their son Thomas and his wife Constance, had moved into an adjoining house which was described in the 1891 census as the 'principal residence on the farm', This house is still there today, as is the farm building in the photograph.

Beyond the house can be seen the face of a quarry, which seems to have been the main source of income for the Anthoines after they gave up farming. By 1901 Thomas Anthoine jnr is a widower, still living at Longueville with his widowed mother, and giving his occupation as 'managing a gravel quarry'.

But successive earlier generations of Anthoines seem to have farmed here. It is possible to trace the lineage back to Philippe (1710- ) the son of Pierre Anthoine. Philippe was born in St Saviour and married Elizabeth Anthoine, presumably a cousin, in 1743. Elizabeth may have been descended from the St Saviour Anthoines, or possibly from the branch of the family in Grouville. A total of 166 Anthoine baptisms can be found in the Jersey church registers up to 1842, and all of these except for one were registered in St Saviour or Grouville.

The two ladies in the photograph are Jeanne Marguerite Gautier, nee Houlgate, and her spinster sister Marie. Jeanne, who was born in St Lawrence, was the wife of Alphonse Julien Gautier, born at Merville sur Mer, Normandy in 1835.

In 1871 the Gautiers were living at Grove Cottage, Petite Longueville, with their son and daughter Alfred Alphonse and Louisa. By 1881 the census shows that they had moved to the Vingtaine of Grande Longueville, and presumably to Longueville Farm. Alphonse, and his wife, whose name has been anglicised to Jane in the census record, are living with Alfred and Jane's 80-year-old mother Jeanne Houlgate.

By 1891 the Gautiers appear to have had a very busy farm because five workers are recorded as living with them, cowherd Jean Le Monier, groom Albert Le Roy, and servants Auguste Cardomen, Marie Le Boutillier and Marie Aufret, all from France.

Jeanne Marguerite and Marie had a brother Pierre. They were born at Waterloo Farm, Rue des Moulins (Waterworks Valley) where their father, Pierre, who was born in Valognes, France in 1795, farmed 35 acres, employing five workers.

Their mother Jeanne was born in Coutances, Normandy in 1800.

The Houlgates seem to have been connected to the Anthoines by marriage, which probably explains how Alphonse and Jeanne Marguerite took over Longueville Farm.

Alfred Alphonse Gautier married Eugenie Rose Voisin, born in Granville. She bacame landlady of the Bagot Inn and they had five children. Alfred was a busy man. He helped his ageing parents on their farm and was a merchant's traveller during the day, helping at the Bagot Inn in the evening.

His sister Louise went to university in Paris to study art, music and languages. She never married and lived at Longueville Farm with her parents, giving private lessons to help support the family, until eventually they gave up the farm.