No 8 King Street, part of British Home Stores since the mid-1960s, started life as a drapery. It is shown in a trade directory as being run by J Francis in 1834. By the time of the 1841 census the ocupants were linen draper Elias Bertram (45) and tailor Joseph Wright (50).

A picture from the 1930s, showing Burtons, No 4; Woolworth, No 6, and Noel and Porter, with the blinds, beyond

Some time before 1851 the business was taken over by John Philip King, a tailor, who was in partnership in the 1860s with draper George Dumaresq. During the mid-1800s the property was known as Old London House. George Dumaresq had a staff of six. George, who was 40, was not related to 38-year-old Philip Dumaresq, who ran a drapery next door at No 6.

George was the son of Jean Dumaresq and Jeanne Pirouet, from the Grouville branch of the Dumaresq family and was not related to Philippe Dumaresq, who was in business next door at No 6, also as a draper, at the same time.

Tailor John King (28), his wife Jane (nee Marie) and two-month-old daughter Delicia lived at No 8 in 1851. The family was still living at No 8 in 1861, but Delicia must have died in infancy because John and Jane’s three children are listed as John Thomas, Jane Rachel and Delicia Margaret (2 months).

King and Dumaresq were followed by draper Elisha Ogier, who is shown as the occupant in the 1871 census. But soon after No 8 was acquired by Clement Noel and William Porter, who went into partnership as drapers, trading as Noel and Porter in 1871. They acquired London House, King Street, and Don House, Don Street, and the business grew significantly until it was taken over in 1953 by high street rival Frederick Baker and Sons. who eventually sold out in the early 1960s to allow the site to be redeveloped for BHS, which closed down in 2016. Although temporary occupants were trading in December 2016, the future occupancy of the premises is uncertain. 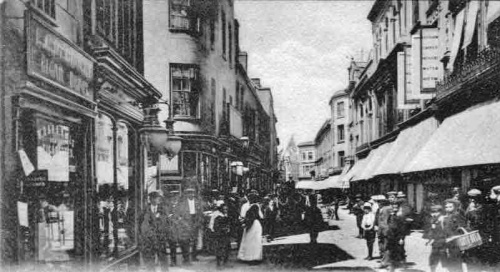