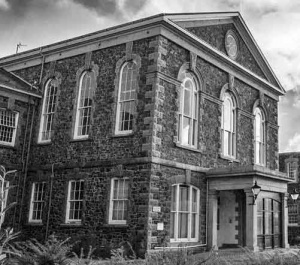 From a What's your street's story article by Jersey Archive

St Saviour’s Hospital is a relatively modern name for the institution that was called the Jersey Lunatic Asylum for nearly 100 years. In 1952 the name was changed to the Jersey Mental Hospital and then in 1963, when attitudes began to change towards mental health, the current name was adopted.

The foundation stone for the asylum was laid on Saturday 29 July 1865, nearly 20 years after the States had first been criticised by Whitehall for their care of islanders with learning disabilities and mental health issues in 1847.

At this time the States were extremely reluctant to spend money on a purpose-built asylum. The afflicted were kept at home where the quality of care differed greately, with some well cared for and others treated as animals living in outhouses in appalling conditions. Some were sent to asylums in France or England and arelatively small number, who were also paupers, were housed in the General Hospital, which at the time functioned as a poor house and a hospital.

The original architect's drawing for the lunatic asylum

Such was the frustration at the inaction of the States in respect to this issue that in 1859 the Lieut-Governor, Sir Robert Percy Douglas, made the rare decision to exercise his power of veto in the States. He was successful in blocking a proposal to delay the building of a public asylum again and the transfer of patients to Isaac Pothecary’s private asylum at Bagatelle.

[Editor’s note: This date may be incorrect because we believe that Douglas was not appointed Lieut-Governor until the following year.]

Having convinced the States to finally build the asylum, Douglas was also instrumental in selecting Queen’s Farm at St Saviour as the ideal site, negotiating the lease of the farm and land from the Crown for £84 per annum.

The iconic building was designed by architect Thomas Gallichan, who was responsible for the design of other States projects such as the Royal Court House and the General Hospital. He drowned while bathing in 1866 and never saw the asylum completed. Dr John James Jackson was appointed on 27 March 1868 as the Medical Superintendent of the institution and the first 12 patients were admitted from the General Hospital on 11 July 1868.