The history of Bouley Bay

The story of Bouley Bay mirrors the development of the military, shipping and tourism in Jersey from the 16th to the 21st century. It is the people of the area and the effect of these developments on their lives which bring the stories of Bouley Bay to life. In July 1549 a French expedition landed at Bouley Bay. They met the local militia at Jardin d’Olivet and after a fight in which the Lieut-Bailiff, Jurat Helier de la Rocque, was killed, the French were defeated and retired to St Malo with their dead and wounded.

The battle of 1549 must have influenced the States decision in 1596 to place a cannon at the harbour. The responsibility for its upkeep was divided between the Constables of Trinity, St Martin, St John and Grouville.

Developments in fortifications at Bouley Bay continued throughout the French and Napoleonic Wars of the late 18th and early 19th centuries. On 5 May 1807 the States approved a proposal that a magazine in stone be built to lodge the munitions and cannon of the battery of the harbour.

A record of the fortifications of the Island compiled in 1857 includes a number of details concerning the defences at Bouley Bay. The fortifications listed are Vicart Battery, Les Hurets Battery, Leicester Battery, Bouley Battery, Les Charriers, Hommet, l’Islet and Le Tacqueral. The volume records that since the end of the Napoleonic Wars in 1815 ‘a powerful enclosed battery near the pier has been constructed’. 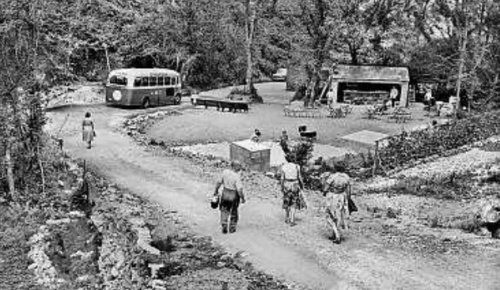 1957, Cafe Corner, where buses turned at the bottom of the hill

It was in the 19th century that a number of harbours, including Bouley Bay, were developed. The rise of the oyster fishing industry led to a significant number of boats being moored around the bays of the Island and increased calls from the fishermen for protection for their vessels.

In 1826 petitions addressed to the States of Jersey were received from a large number of inhabitants of different parishes concerning the harbours of La Rocque, Bouley and Rozel. The petitioners asked for protection for boats in those areas.

In November 1826 the States authorised the construction of a jetty at Bouley Bay. The construction of the original jetty sheltered the fishing fleet, but in 1839 a second petition from the fishermen asked for additional works at the harbour. The additional works to extend the jetty were drawn up by Mr Walker in 1845 and then revised by architects Le Sueur and Bree in 1869.

As is the case with many of the bays around the island, a number of stories exist of individuals drowning in the sometimes hazardous waters of Bouley Bay.

In 1880 newspapers reported an accident in Bouley Bay in which Bienaime Le Fillastre drowned just outside the harbour. The inquest found that Bienaime was well known for his ‘drunken habits’ and that at 2.45 on the morning of the accident he and T Le Masurier had knocked on the door of the hotel and purchased a bottle of brandy, and borrowed the key to the stable where Le Masurier kept his boat.

The hotel keeper, who was a witness at the inquest, was Thomas Perree. He is described in 1881 as a 22-year-old who was married to Emily, who was 34. The hotel which Thomas and Emily ran was the establishment that became the Water’s Edge. 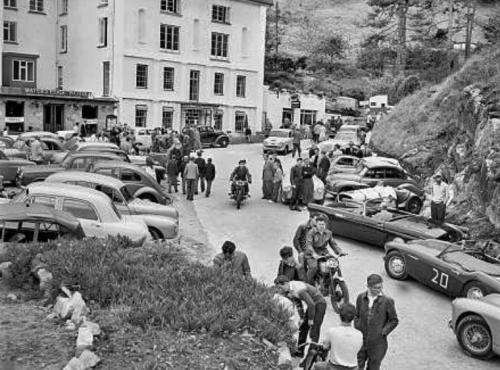 Competitors outside the Water's Edge Hotel for the 1958 hill climb

Significant residential properties in the Bouley Bay area include Rockmount, which, with its gardens, was built by Josue Le Bailly on land that he purchased from Charles Nicolle and Jean Sinel in 1857. In the 1861 census Josue was 49 and was listed as a Jurat, banker and ship owner. In his lifetime he had links with the Jersey Imperial Hotel Company, was a trustee of the Jersey Savings Bank, and was Procureur du Bien Public for St Helier.

He was also the chairman of the Jersey Mercantile Union Bank, which opened in 1834 and dramatically suspended payments on 1 February 1873. This was the leading bank in the island and it closed with liabilities of £300,000 and assets of only £30,000.

Josue Le Bailly was sent to prison on 18 February for ‘breach of trust’. He was put on trial for embezzlement and culpable fraud and neglect at the Criminal Assizes in May 1873. The trial was eagerly followed and reported in the newspapers because Le Bailly had been a popular and respected figure in the island and the closure of the bank had a significant impact on many islanders.

The trial continued for 11 days, with Advocate Henry Le Vavasseur dit Durell representing the defence. The newspapers recorded in detail the summing up, with Advocate Durell giving a spirited oration, talking of Nicolle as ‘the man whom not three months ago we looked upon with pride, as the ornament of our judicial bench, the father whom everybody loved and respected, to be arrested in the middle of the night, in the midst of his family, to be cloistered up within the four walls of a prison and, oh horror, dragged from the court to the prisonh, and from the prison to court, in that vehicle which usually contains convicts of the first order’.

The main defence was mental infirmity, with Advocate Durell highlighting that his client had suffered an accident on leaving his house at Bouley Bay in July 1869. He had fallen from his carriage and fractured his skull, leaving him senseless for seven days. The advocate also brought witnesses to attest to Nicolle’s change in mental state after the accident. He painted a picture of a man who had memory lapses and could at times be well, and at other times incoherent.

The jury found him guilty of three of the counts of which he was accused and sentenced him to five years penal servitude.

One of the main events in the island’s motor sport calendar is the Bouley Bay Hill Climb, which is organised by the Jersey Motor Cycle and Light Car Club. The first hill climb took place in 1920 and the events continued through the 1920s and 30s, until they were stopped by the German Occupation.

The club was quick to organise races after the Occupation and the ‘’Evening Post’’ of 8 February 1946 highlighted the plans for motor racing in the island in the autumn, with a proposed hill climb at Bouley Bay. The following year Bouley Bay was one of only five venues in the inaugural British Hill Climb Championship, and has held championship events ever since.