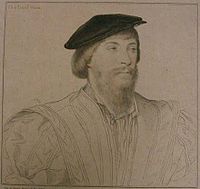 Thomas, Lord Vaux, an English poet and eldest son of Nicholas Vaux, 1st Baron Vaux, was born in 1510. In 1527 he accompanied Cardinal Wolsey on his embassy to France; he attended Henry VIII. to Calais and Boulogne in 1532; in 1531 he took his seat in the House of Lords, and was made Knight of the Bath at the coronation of Anne Boleyn. He was Governor of Jersey for under a yesr, before selling the office to Edward Seymour, Viscount Beauchamp.

He had acquired the office from Sir Arthur Darcy, in exchange for a substantial property of his in Northamptonshire, but King Henry VIII would not accept the arrangement and forced Vaux to sell to an approved buyer,

At 14, the year he succeeded to his title on the death of his father, he married Elizabeth Cheney, who was four years older. While they were not blood relations, his father had once been married to her grandmother, and so they had cousins in common.

Two of his poems were included in the Songes and Sonettes of Surrey (Tottel's Miscellany, 1557). They are "The assault of Cupid upon the fort where the lover's hart lay wounded, and how he was taken," and the "Dittye... representinge the Image of Deathe," which the gravedigger in Shakespeare's Hamlet misquotes. Thirteen pieces in the Paradise of Dainty Devices (1576) are signed by him.

Lord Vaux died in Oct 1556. Sketches of him and his wife by Holbein are at Windsor, and a finished portrait of Lady Vaux is at Hampton Court.