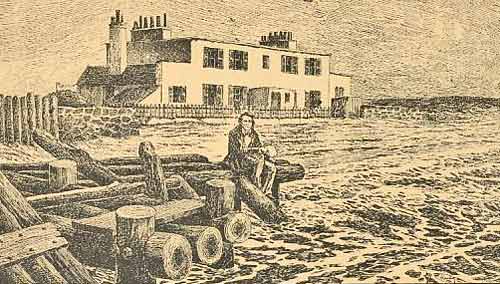 Victor Hugo on the beach at Greve d'Azette

Victor-Marie Hugo (26 February 1802 – 22 May 1885) was a French poet, playwright and novelist who lived for 20 years in exile in the Channel Islands, initially in Jersey.

Hugo is sometimes identified as the greatest French poet. Outside France, his best-known works are the novels Les Misérables and Notre-Dame de Paris, known in English as The Hunchback of Notre-Dame.

Victor Hugo was the third and last son of Joseph Léopold Sigisbert Hugo (1773–1828) and Sophie Trébuchet (1772-1821). He was born in 1802 in Besançon and lived in France for the majority of his life. However, he was forced into exile during the reign of Napoleon III, and after a short period in Brussels, in 1852 he moved to Jersey, where he stayed until 1855. He lived in St Clement but was expelled after three years and moved to Guernsey, where he lived from 1855 to 1870 and again in 1872-1873. There was a general amnesty in 1859; after that, his exile was by choice.

While in exile, Hugo published his famous political pamphlets against Napoleon III, Napoléon le Petit and Histoire d'un crime. The pamphlets were banned in France, but nonetheless had a strong impact there. He also composed or published some of his best work during his period in Guernsey, including Les Misérables, and three widely praised collections of poetry (Les Châtiments, 1853; Les Contemplations, 1856; and La Légende des siècles, 1859).

It was only after Napoleon III fell from power and the Third Republic was proclaimed that Hugo finally returned to his homeland in 1870, where he was promptly elected to the National Assembly and the Senate.

He was in Paris during the siege by the Prussian army in 1870, famously eating animals given to him by the Paris zoo. As the siege continued, and food became ever more scarce, he wrote in his diary that he was reduced to "eating the unknown."

His arrival in St Helier on 5 August 1852 caused a great stir, as the many political refugees who were in the Island at that time all proceeded to the quay to greet him. Never at a loss for words, Hugo assured them that he had come to share the same sky, the same exile and that they were all to love one another.

He then went in triumph to La Pomme D’Or Hotel, where he stayed until he found a house by the sea, 3 Marina Terrace, Grève d’Azette, St Clement. He stayed here with his wife, children and sons-in-law for three years. His mistress, Juliette Drouet, was found lodgings just along the coast at Havre des Pas. The Hugo family did not mix much with the local people but instead had family picnics at St Brelade and enjoyed the sea views and games on the beach. 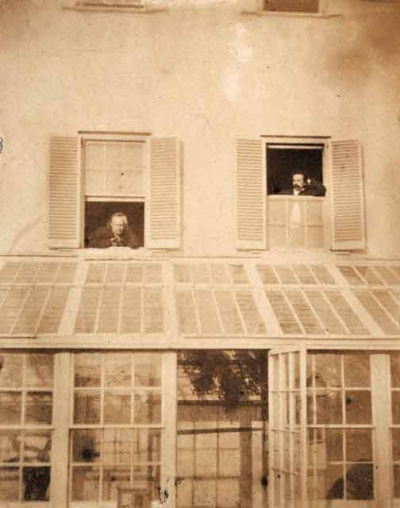 Victor Hugo and his son Charles at the windows of their Jersey accommodation, Marine Terrace

Jersey society was not, in general, so much impressed by his literary reputation as by the fact that he was a Peer of France. Some would call him “Monsieur le Duc”, which amused him all the more because he was without pretension (“count”, the title which his father had held, had passed on to his brother).

The Hugo family lived in a second-floor room in Marine Terrace. It had a view on the sea. He got up at sunrise and worked until lunchtime. Taking some exercise in the early afternoon, he would ride on the sands nearby or on St Aubin's beach, or else go for a swim in the sea. He was a very active man, a keen walker. His wife was fond of bathing.

Near the house, accessible at low tide from the Dicq, stands a large rock, Le Rocher des Proscrits, from which the coast of France is visible on a clear day. A plaque was set in this rock in 1954 in memory of Victor Hugo. He would climb to the top, or lean against the rugged granite. His sons or Auguste Vacquerie, a lifelong admirer who had followed him in exile, would take photographs of him there, alone, in thought, facing France.

In the early years of exile, photography became a family affair. Victor Hugo paid very close attention to this fledgling art. He perceived its use as a political tool to broadcast his image as an exile in France. He also saw editorial promise. His sons Charles and, to a lesser degree, François-Victor, organised a photographic studio at Marine Terrace with Auguste Vacquerie. The Jersey workshop was a unique adventure. It was both a look at the landscape which sometimes inspired drawings by Victor Hugo and a testimony to outlaws in exile.

A few daguerreotypes show the interest of the poet in photography in the late 1840s, but it was his exile that marked the start of the writer’s real dabbling in the art. Through Edmond Bacot, a photographer from Caen who came to Jersey to support the cause of the outlaws. The Jersey Workshop was a photographic studio in the greenhouse of Marine Terrace. A joint project for a book about the Channel Islands which was illustrated with photographs kept the group busy. While the book was never finished, it did produce an intense production of prints on salted paper which were the highlights of a fruitful and creative period.

Victor Hugo quickly understood the artistic and popular interest of the medium. He drew inspiration from certain photos for his drawings and was involved in the composition and staging that fixed the image of the banished poet watching France from the rocks of Jersey. The purpose of the workshop was also to preserve the memory of exiles whose portraits featured in many scrapbooks (Album des Proscrits, Album Allix, Album Philip Asplet...) which were sometimes decorated with paintings or collages by Charles Hugo.

This activity continued at Hauteville House in Guernsey in 1855, where a small laboratory was installed between the tapestry lounge and the workshop. The friendship and esteem between Hugo and Edmond Bacot was undeniable and it was to Bacot that the honour of photographing the house fell in 1862. This first report marked the start of the attraction that this house would always hold for photographers.

The poet's interest in photography can also be seen in the many photos he kept for their documentary or artistic value. He became friends with other photographers like Etienne Carjat or Nadar, who ensured that the image of Victor Hugo as patriarch, with beard and white hair, remained forever fixed in our collective memory. Julia Margaret Cameron, the famous English photographer from the Pre-Raphaelite period sent him 30 pictures in gratitude and admiration. The value of photography as a tribute is also evident in portrait pictures which were sent as a souvenir accompanying letters from his writer friends such as Alexandre Dumas and George Sand.

This fairly uneventful life enabled Hugo to return to his poetry and while in Jersey he wrote both "Les Châtiments" and most of "Les Contemplations". One Jersey poem written at Grève d’Azette records how he had been nipped by a crab, but had been generous enough to throw it back into the sea. Although as he pointed out in letters to friends, he could not be forever writing or enjoying the scenery - he needed more stimulating diversions.

The most harmless of these and the one in most keeping with his temperament, was the art of photography. His son Charles managed to acquire all the necessary equipment from the continent and Hugo was photographed against some of the most Gothic scenery in Jersey.

The action which was to prove his downfall was Hugo’s continuing support of Republican ideas. He used every opportunity to spread such sentiments. He was also a supporter of the exiles’ Jersey newspaper L’Homme, which had printed a letter sent to Queen Victoria by a Republican fanatic, accusing her of unimaginable goings on in Paris during her return visit to Napoleon III. For this act of treason, the editor, owner and seller were all expelled from Jersey.

Hugo thought that this expulsion, without a trial, was outrageous and he wrote a declaration saying so, which he posted in the streets of St Helier. Hugo’s name topped the list of signatories and the declaration concluded with the bravado “Expel us too”. The next morning, the Constable of St Clement, on the Lieutenant Governor’s orders, did not hesitate to do so. Victor Hugo was forced to set sail for his new asylum on Guernsey on 31 October 1855.

In February 1881 Hugo celebrated his 79th birthday. To honor the fact that he was entering his eightieth year, one of the greatest tributes to a living writer was held. The celebrations began on the 25th when Hugo was presented with a Sèvres vase, the traditional gift for sovereigns. On the 27th one of the largest parades in French history was held. Marchers stretched from Avenue d'Eylau, down the Champs-Élysées, and all the way to the center of Paris. The paraders marched for six hours to pass Hugo as he sat in the window at his house. Every inch and detail of the event was for Hugo; the official guides even wore cornflowers as an allusion to Cosette's song in Les Misérables.

Victor Hugo's death on 22 May 1885, at the age of 83, generated intense national mourning. He was not only revered as a towering figure in literature, he was a statesman who shaped the Third Republic and democracy in France. More than two million people joined his funeral procession in Paris from the Arc de Triomphe to the Panthéon, where he was buried. He shares a crypt within the Panthéon with Alexandre Dumas and Émile Zola. Most large French towns and cities have a street named for him. The avenue where he died, in Paris, now bears his name.

The people of Guernsey erected a statue in Candie Gardens, to commemorate his stay in the islands.

Victor Hugo's son Charles was the keenest photographer in the family and pictures which remain of his time in Jersey include some of the earliest surviving outdoor photographs taken in the island. 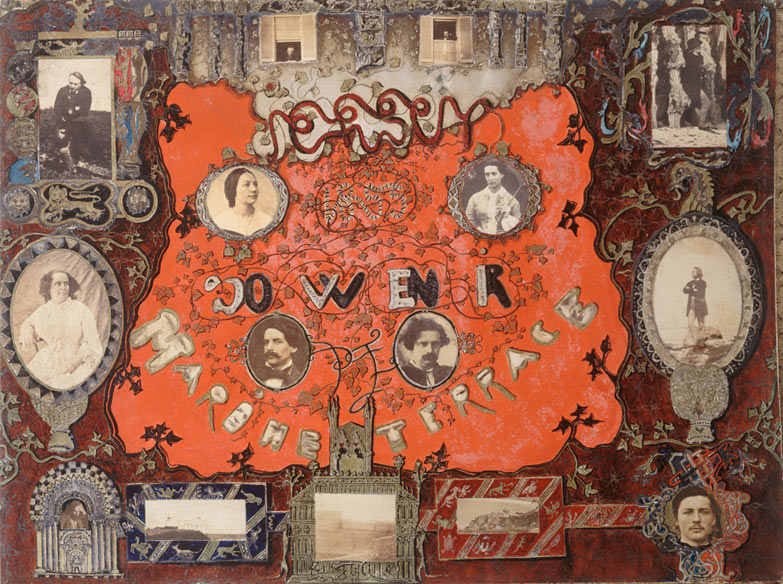 Composed in Guernsey from 1855, this album contains 123 photographs taken mostly in Jersey in the workshop at Marine Terrace. It pays tribute to Augustine Allix, friend of the Hugo family and musician. The frontispiece on a bright red background that combines photographic portrait cut-outs and illumination-like drawings, offers a unique testimony to Charles’ design skills. It is a true storyboard juxtaposing portraits and landscapes, drawings and photographs, colour and black and white. It shows the exile adventure of the Hugo and Allix families with great finesse and innovation, as evidenced by the pieces of faces forming the letters Marine Terrace.
Retrieved from "https://www.theislandwiki.org/index.php/Victor_Hugo"